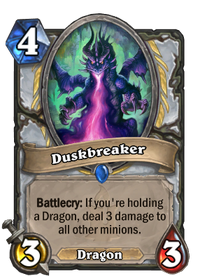 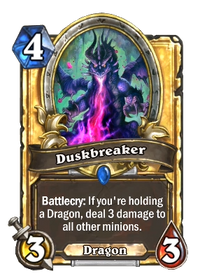 Battlecry: If you're holding a Dragon, deal 3 damage to all other minions.

Waking up at the break of dusk is just not as impressive.

Duskbreaker is a rare priest minion card, from the Kobolds and Catacombs set.

Duskbreaker can be obtained through Kobolds & Catacombs card packs, or through crafting.

Compared to Hellfire, Duskbreaker essentially offers a free 3/3 body, as long as its condition is fulfilled. This makes it a very strong card that should always be included in all priest decks with dragon synergies.

Duskbreaker appears to be a member of the twilight dragonflight, similar to Twilight Drake, Twilight Guardian, and Twilight Whelp.

While Sintharia's experiments resulted in very unstable twilight drakes, and Nefarian's experiments resulted in infertile or deformed chromatic dragons, their efforts paved the way for Deathwing to perfect the process of breeding and artificially aging twilight dragons. These draconic aberrations were first seen in-game in Wrath of the Lich King, and became major antagonists in Cataclysm. The twilight dragonflight is now nearly extinct, most being killed in the war against Deathwing.