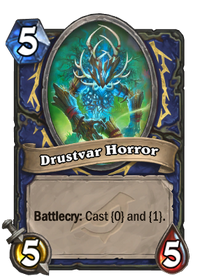 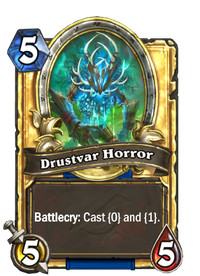 Drustvar Horror is an uncollectible shaman minion card, generated by Swampqueen Hagatha, from the Rise of Shadows set. 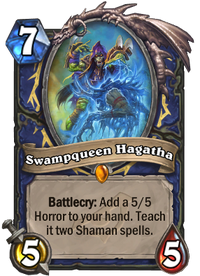 Drustvar (pronounced "druhst-VAHR") is the westernmost region of Kul Tiras. Heavily forested and mountainous, Drustvar is more inhospitable than neighboring lands, and produces most of the kingdom's ore as well as some of its toughest warriors.

For ages, Drustvar has served as the seat of power for House Waycrest, one of Kul Tiras's most powerful families. As the original home of the Drust in ancient times, the region witnessed intense fighting as the first humans battled to colonize the islands. Its legacy remains both dark and sinister, and has resurfaced in modern times in the form of perverse witchcraft and twisted cults.

Drustvar Horror is a wicker construct.

The wicker constructs are created by the Heartsbane Coven from dead objects such as wood, flesh, fur and bones, and animated by ancient Drust death magic. They are powered by the souls of human victims or by the spirits of ancient Drust which are thus given physical forms. The witches of the coven control the wicker creatures with charms. The strongest charms are in the hearts of the wicker creatures, pulsing like heartbeats, and are used to anchor their spirits. Some of the souls are still aware that they are inside the golems. It is hard to tell where the bone parts of a wicker creature end and where the wood parts begin.

As Hagatha is mainly associated with Gilneas rather than Kul Tiras, it is unclear exactly what her relation is to Drustvar's Heartsbane Coven or how she came into possession of some of their wicker constructs.