Druid of the Scythe

From Hearthstone Wiki
Jump to: navigation, search
Druid of the Scythe
Regular 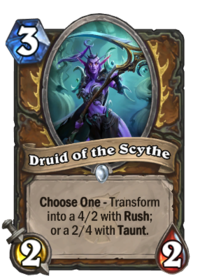 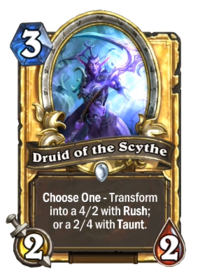 She's a scythe for sore eyes.

Druid of the Scythe is a common druid minion card, from the The Witchwood set.

Druid of the Scythe can be obtained through The Witchwood card packs, or through crafting. 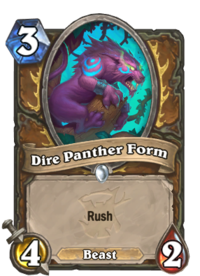 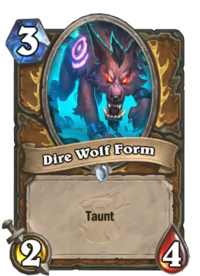 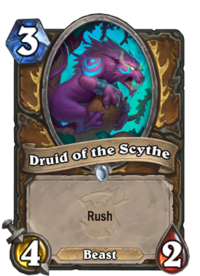 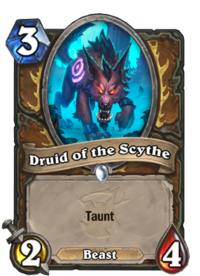 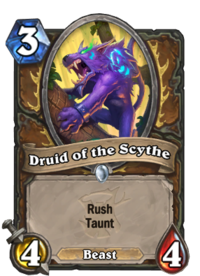 This minion has fairly average stats in both forms and offers decent flexibility. It can be either an average Taunt minion comparable to Squirming Tentacle or a 4-damage removal that is unlikely to survive trades. It's best used in decks that only run a few spells as an alternative source of removal; namely Spiteful Druid.

Summon
The rage, it claims me!
Attack
For the pack!

The Druids of the Scythe are a sect of druids who advocated the use of the Pack Form during the War of the Satyr. Originally calling themselves Druids of the Pack, they shapeshifted into a powerful yet unwieldy form that embodied the fury of the wolf Ancient Guardian, Goldrinn. They called this form the Pack Form, a form that turned them into wolves. Although powerful, the Pack Form tended to turn the druids feral. Malfurion Stormrage prohibited the use of this form because it couldn't be controlled. However, the Druids of the Pack continued to practice the form in secret, but eventually lost themselves to the form's feral rage. They were eventually brought under the leadership of Ralaar Fangfire, who promised them a way to tame the Pack Form.

Taught by Ralaar Fangfire, these Druids of the Pack sought to temper the uncontrollable rage inherent in their chosen form. To do so, they willingly submitted to the energies of the Scythe of Elune, a mystical artifact created from a Fang of Goldrinn and the Staff of Elune.

Rather than abate the druids' fury, however, the weapon transformed Ralaar and his followers into worgen: bestial humanoids enslaved by their own primal instincts.

While in the worgen form, the druids eventually lost their minds to its violent nature. Blinded by all-consuming rage, Ralaar’s druids tore through friend and foe alike during battle with the satyrs. Night elves wounded by the unruly beasts contracted a virulent curse that turned them into worgen as well. Desperate to stanch the affliction’s spread, Archdruid Malfurion Stormrage mournfully banished the worgen beneath Daral'nir in the Emerald Dream, where they would be in peaceful slumber for all eternity.

For millenia, the worgen threat was contained until the day Arugal tampered with summoning worgen after looking into Ur's research, calling them into the world to combat the Scourge but accidentally unleashing the worgen curse on Gilneas. Some of the worgen were also released from their slumber by Velinde Starsong using the Scythe of Elune. Some of the worgen at Talonbranch Glade have been there since Velinde summoned the worgen, and so some of the worgen there are Druids of the Scythe. Likewise, the Nightbane pack in Duskwood are also night elven worgen.

Some of the Druids of the Scythe traveled as a pack in the Emerald Dream until they found their way to Val'sharah and went their separate ways. An Archdruid wielding the Scythe of Elune is able to return these feral worgen to their original night elf forms.

This card's artwork appears to depict a Druid of the Scythe wielding the Scythe of Elune itself.