Druid of the Fang

From Hearthstone Wiki
Jump to: navigation, search
Druid of the Fang
Regular 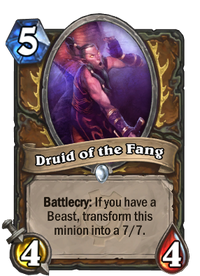 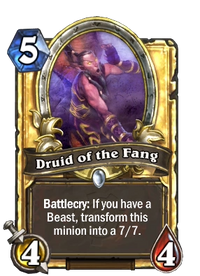 Battlecry: If you have a Beast, transform this minion into a 7/7.

The Druids of the Fang live in the Wailing Caverns. They wear cool snake shirts and tell snake jokes and say "bro" a lot.

Druid of the Fang is a common druid minion card, from the Goblins vs Gnomes set. If there is a friendly Beast on the field when its Battlecry activates, it will transform into a 7/7 Druid of the Fang, which is itself a Beast.

Druid of the Fang can be obtained through Goblins vs Gnomes card packs, or through crafting. 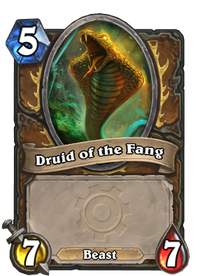 Without making use of its Battlecry, this is an expensive and unremarkable card. Its value in a deck largely hinges on the availability of a friendly Beast to activate its Battlecry. Druid-class Beasts include Malorne, the transformed Druid of the Claw, Druid of the Flame, and Druid of the Saber minions, Savage Combatant, Mounted Raptor and the 3/2 Panther from Power of the Wild. If none of these suit, Druid of the Fang may provide an incentive to include neutral Beasts — especially Jungle Panther or Stranglethorn Tiger, as they come with Stealth and thus have synergy with a Savage Roar combo.

Summon
Snakes, it has to be snakesss.

"None can stand against the serpent lords!" - Lady Anacondra

In years past, a night elf druid named Naralex discovered a network of underground caverns within the heart of the Barrens. Dubbed the 'Wailing Caverns', these natural caves were filled with steam fissures which produced long, mournful wails as they vented. Naralex believed he could use the caverns' underground springs to restore lushness and fertility to the Barrens - but, once connected to the Dream, the druid's vision became a nightmare.

Soon the Wailing Caverns began to change - the waters turned foul and the once-docile creatures inside metamorphosed into vicious, deadly predators. It is said that Naralex himself still resides somewhere inside the heart of the labyrinth, lost in the edges of the Emerald Dream. Even his former acolytes have been corrupted by their master's waking nightmare - transformed into the wicked Druids of the Fang.[3]

The Druid of the Fang were a group of druids found in the Wailing Caverns. Part of an order of noble druids whose plan was to heal the Barrens, they instead began seeking to remake that land to match their own, twisted dreams. They were eventually defeated by a group of adventurers.

Druid of the Fang, full art