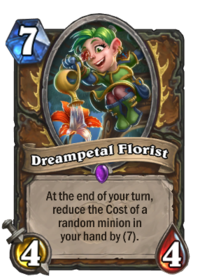 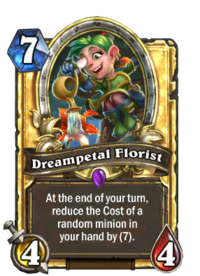 At the end of your turn, reduce the Cost of a random minion in your hand by (7).

Dreampetal Florist is an epic druid minion card, from The Boomsday Project set.

Dreampetal Florist can be obtained through The Boomsday Project card packs, or through crafting.

This card is a very powerful combo enabler, dramatically reducing the cost of a card and allowing card combos that would normally be impossible, such as playing Malygos with Flobbidinous Floop or King Togwaggle with Azalina Soulthief on the same turn.