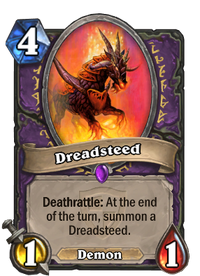 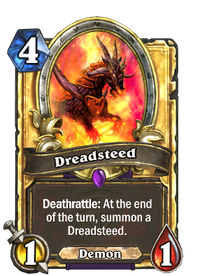 Deathrattle: At the end of the turn, summon a Dreadsteed.

Crescendo himself summoned this steed, riding it to victory in the Grand Tournament. Wherever he rides, an army of riders ride behind him, supporting the legendary champion.

Dreadsteed is an epic warlock minion card, from the Grand Tournament set.

Dreadsteed can be obtained through The Grand Tournament card packs, or through crafting.

Dreadsteed is best suited to decks that benefit from constant board presence, such as slow control decks. Summoning an endless amount of 1/1's unless silenced is very good value over multiple turns. A possibly very effective combo after playing Dreadsteed is Power Overwhelming, then Shadowflame or Void Terror, as its Deathrattle negates the usual cost of sacrificing a minion. Since Dreadsteed is a weak standalone minion, many Warlock spells can be used to kill and then resummon it at the end of each turn, along with providing additional effects from the spells, such as Mortal Coil, Imp-losion, or Bane of Doom.

Because the copies respawn at the end of each turn, make sure you have room for Dreadsteed to respawn. In cases where you have a lot of Dreadsteeds in your field but your opponent is out-tempoing you and you have no good play left, play your other minions to prevent Dreadsteed from spawning once they have died.

The dreadsteed of Xoroth is the level 40 epic warlock ground mount. Xoroth is the home planet of these fiery, horse-like demons, who serve as the mounts of the Dreadlords. The finest belong to the Nathrezim Dreadlord, Lord Hel'nurath the Stable Keeper. 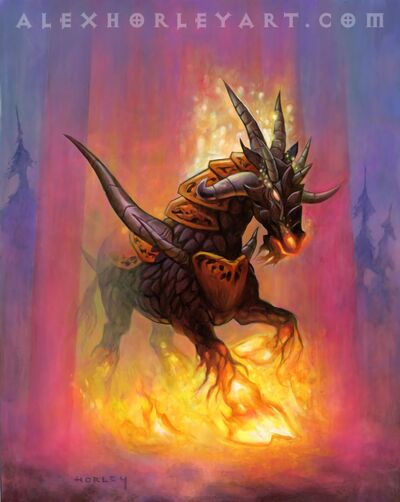