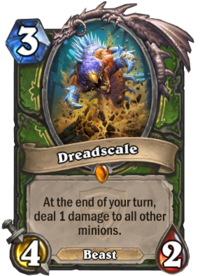 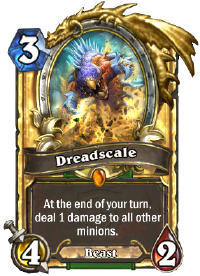 At the end of your turn, deal 1 damage to all other minions.

Let's be clear about this: ACIDMAW is the sidekick.

Dreadscale is a legendary hunter minion card, from the Grand Tournament set.

Dreadscale can be obtained through The Grand Tournament card packs, or through crafting.

Despite the flavor text and lore concept of Acidmaw and Dreadscale working together well, the 10 mana required to put a measly 4/2 and a 4/1 (Acidmaw takes damage) on the board is far too much, and the situations where this combo is worth it are far and few between. Other removal combos are usually preferable and easier to achieve, many requiring only one card: Doomsayer for all(and best with Freezing Mage), DOOM! and Twisting Nether for warlocks, Poison Seeds and Starfall for druids, or Equality+Wild Pyromancer for paladins.

Dreadscale is actually a good card in a theoretical Control Hunter deck. As of League of Explorers, there is no competitively viable hunter control deck. Dreadscale can play the same role that Baron Geddon plays in other control decks. It's great against aggro since aggro minions don't usually have high Health. Specifically, it is good at clearing the Deathrattles of Haunted Creepers. It doesn't reach minions such as the Knife Juggler that Baron Geddon would kill, but Dreadscale can also be played on turn 3 and doesn't decrease your life total.

Dreadscale can also be used with Veranus. Not only is the combo cheaper, it only destroys the opponent side of the board and both cards are perfectly valid on their own.

Dreadscale is one of the two jormungars that compose the second part of the first encounter in the Trial of the Crusader - the Northrend Beasts. 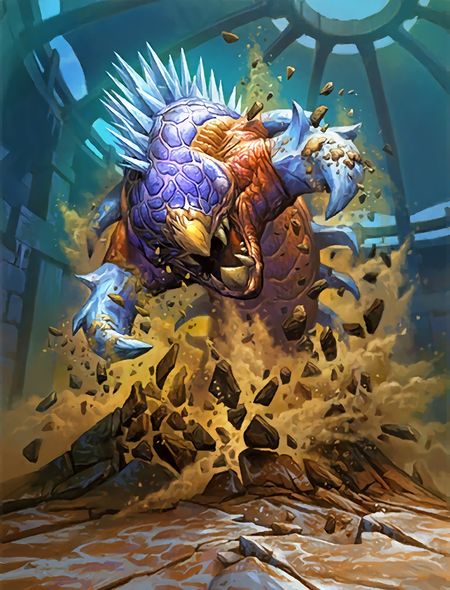