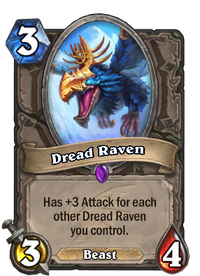 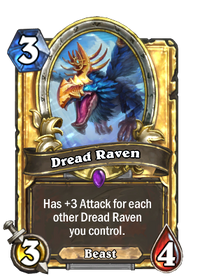 Has +3 Attack for each other Dread Raven you control.

Fun Fact: A group of three Dread Ravens is an unkindness. Four is lethal!

Dread Raven is an epic neutral minion card, from the Descent of Dragons set.

Similarly to Pogo-Hopper, Dread Raven's main gimmick involves becoming stronger by creating multiple copies of it. However, Dread Raven needs to have all of its copies on the field in order to work. This is best achieved by the hunter or rogue classes, with the former having many Beast-centric copying cards such as Dire Frenzy, Hunting Party and Ramkahen Wildtamer, while Rogue can use Gang Up, Lab Recruiter or Togwaggle's Scheme in a similar fashion to how a Pogo-Hopper deck would play, but Shadow of Death is compatible unlike Pogo-Hopper since Dread Raven's ability is an ongoing effect instead of a Battlecry. However, they are vulnerable to Flik Skyshiv and area of effect removals such as Flamestrike. Scarlet Webweaver and Tundra Rhino will allow you to summon multiple Dread Ravens and deal damage with them at the same time.

The dread ravens are the children of the Raven God Anzu, as the kaliri are to Rukhmar and the wind serpents were to Sethe. Long ago, after a battle with Sethe, Anzu was cursed never to fly again. He disappeared into the shadows, later to become the patron God of many flightless arakkoa outcasts. His children, the dangerous and shadowy dread ravens, still populate the Spires of Arak to this day. Fiercely strong and surprisingly intelligent, dread ravens are dangerous when their territory is breached, particularly if their hatchlings are jeopardized. They are a grave threat on land and even more terrifying when they strike from above. Adventurers should be wary of their powerful headbutt or deafening screech. Stronger dread ravens use their wings as weapons, buffeting explorers with winds that threaten to blow them off the spires' high cliffs. Ka'alu is the current leader of the dread ravens; Anzu left her to watch over them when he retreated into a world of darkness.