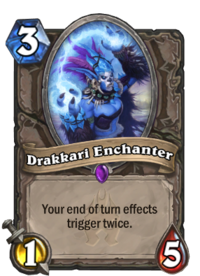 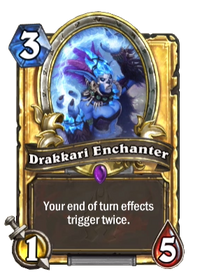 Drakkari sorceresses have the irritating habit of repeating themselves at the end of every sentence. Every sentence.

Drakkari Enchanter is an epic neutral minion card, from the Knights of the Frozen Throne set.

Drakkari Enchanter can be obtained through Knights of the Frozen Throne card packs, or through crafting.

This card is used to enhance the value many end-of-turn effects have, rather than setting up win condition combos. Examples include Kabal Trafficker to gain two Demon cards, Grimestreet Enforcer to give your minions in hand +2/+2, Archmage Vargoth to cast two spells, Highkeeper Ra to deal 40 damage to the opponent, and so on. Some of the more powerful end-of-turn effect cards like Y'Shaarj and The Lich King can't be played on the same turn as this card, but if they can stay alive the next turn, this card will extract even more value out of them.

With Emperor Thaurissan, you can safely discount all cards in hand by 2, allowing for even crazier one-turn combos.

Because this minion has 1 Attack, it can be Recruited by Master Oakheart to set up powerful combos with other minions such as Dragonhatcher.

Summon
Wanna see the voodoo I do?
Attack
Don't be shy!