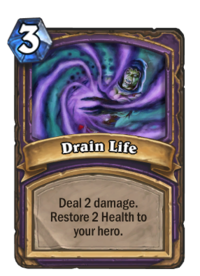 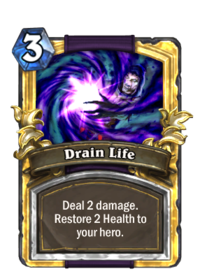 "I've just sucked one year of your life away."

Drain Life is a warlock spell card, from the Basic set.

Two copies of Drain Life are automatically included in all players' collections upon unlocking the warlock class.

Two Golden copies of Drain Life are a reward for raising a warlock to levels 45 and 46.

Drain Life is uncraftable and cannot be crafted or disenchanted.

Although this card provides Warlocks a middling amount of healing - something that will always be handy for Warlocks, Drain Life is marginally worse for removal compared to alternatives like Shadow Bolt or Soulfire (or especially Darkbomb in Wild format).

Drain Soul from the Knights of the Frozen Throne expansion is 1 mana cheaper than Drain Life, and unlike Drain Life its damage and healing both scale with Spell Damage. However, Drain Soul can only target minions, whereas Drain Life can also target heroes.

Presumably, the reason this card has not had its text changed to include Lifesteal is because of Spell Damage modifiers. A minion with Spell Damage +1 would change this card's text to; 'Deal *3* damage. Restore 2 Health to your hero.' which is no longer an example of Lifesteal, because only a portion of the damage dealt has been restored as health.

Drain Life is a warlock spell from World of Warcraft. A channeled ability, the spell deals a small amount of Shadow damage to the target while slowly restoring the warlock's health. It is often used on feared targets to restore the warlock's health without breaking the fear effect. 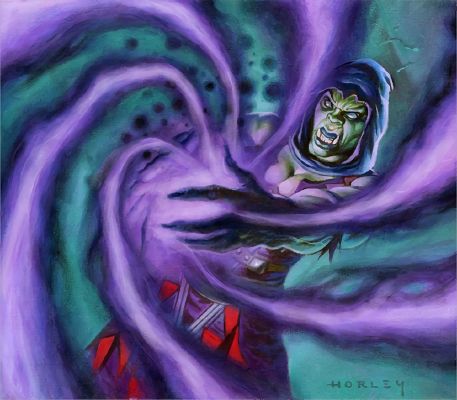