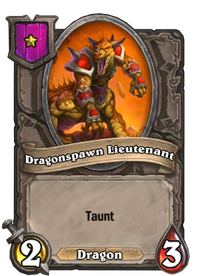 Dragonspawn Lieutenant is a Tier 1 minion in the Battlegrounds game mode.

A solidly statted Taunt for Tavern 1, Dragonspawn Lieutenant is comparable to Vulgar Homunculus, trading off 1 Health for a lack of self-damage. However, in general, this minion is below-average, since Dragon synergies are not relevant until much later, and since it mostly lacks any sort of scalability in the midgame. Should generally be avoided, unless not taking damage early on is important for your hero's success (such as with George the Fallen, who only becomes powerful later in the game), or if you absolutely need an emergency Taunt in your build (for instance, to protect a Monstrous Macaw or Soul Juggler).