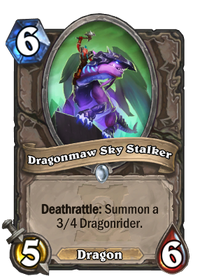 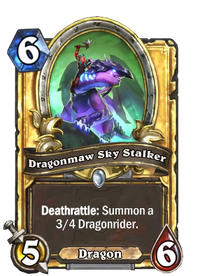 Dragonmaw Sky Stalker is a common neutral minion card, from the Ashes of Outland set.

Dragonmaw Sky Stalker can be obtained through Ashes of Outland card packs, through crafting, or as an Arena reward. 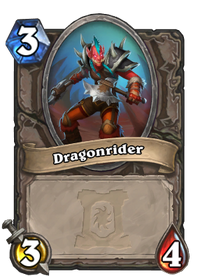 Dragonmaw Sky Stalker is a good midrange Dragon with an effect similar to Savannah Highmane, providing a strong sticky body. The 3/4 minion is less total stats than the Hyenas created by the Highmane, but is also more resistant to board clears and trading.

The initial board presence of this minion is fairly low, so it is best used in decks that can synergize with its Dragon type or Deathrattle.

The Dragonmaw clan are a clan of orcs.

The Dragonmaw who traveled to Draenor, including Chieftain Zuluhed, survived the shattering of the world and its transformation into Outland. They eventually transformed into fel orcs and came to serve the Betrayer, Illidan Stormrage, applying their knowledge of all things draconic to enslave Outland's nether dragons. In their stronghold of Dragonmaw Fortress, the Dragonmaw tortured captured drakes in an attempt to bend them to their will. Many drakes gave up hope and chose to instead do the bidding of the Dragonmaw, while others sought refuge in the skies above the Netherwing Fields, refusing to land for fear of being captured by Dragonmaw war parties. The Netherwing matriarch herself, Karynaku, was captured by Zuluhed and held prisoner atop the Fortress, bound by chains that sapped her power. The Netherwing and their patriarch, Neltharaku, were powerless against Zuluhed, who possessed unknown powers and was likely empowered further by Illidan.