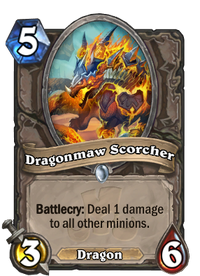 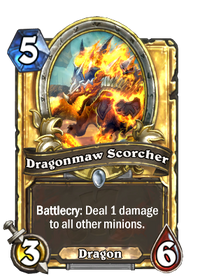 Battlecry: Deal 1 damage to all other minions.

Dragonmaw Scorcher is a common neutral minion card, from the Rastakhan's Rumble set.

Dragonmaw Scorcher can be obtained through Rastakhan's Rumble card packs, or through crafting.

Dragonmaw Scorcher can be used to deal a small bit of AoE to clear the board of small threats, such as the many Silver Hand Recruits an Odd Paladin can summon.

It is also useful as a Dragon synergy activator. It's particularly useful in Dragon Warrior decks since it can be used to activate on-damaged effects and effects that require damaged minions like Devastate and Smolderthorn Lancer.

The Dragonmaw clan (or Nelghor-shomash, "Cry of the Beasts" in Orcish) is an orcish clan dating back to ancient Draenor. Under the command of the shaman Zuluhed the Whacked, the Dragonmaw swore fealty to Warchief Blackhand and accompanied the Old Horde to Azeroth during the First War. After Blackhand's death, the Dragonmaw maintained their fealty to the late Warchief by pledging themselves to Blackhand's two sons and their Black Tooth Grin clan. The Dragonmaw were later empowered by the dreaded Deathwing to enslave the red dragonflight, including the Dragonqueen Alexstrasza herself, forcing the noble dragons to fight for the Horde throughout the Second War. During this time the clan were based out of the ancient stronghold of Grim Batol, which housed the prison of Alexstrasza.

The Dragonmaw retained their dominance of the red flight even after the Horde's defeat at the end of the war, but lost control over their winged captives during the Battle of Grim Batol. Grim Batol was destroyed by the vengeful dragons, forcing the clan to flee into the Wetlands and the Twilight Highlands, where they remained relatively dormant for years and clashed with the Wildhammer dwarves. Part of the clan, including their chieftain Zuluhed, remained on Outland and instead pledged their service to Illidan Stormrage, enslaving the nether dragons of Shadowmoon Valley for the Illidari. The Azerothian Dragonmaw were eventually recruited into the New Horde by Garrosh Hellscream during the invasion of the Twilight Highlands in the wake of the Cataclysm. Under the leadership of Warlord Zaela, the majority of the Dragonmaw remained fiercely loyal to Garrosh during and after the Siege of Orgrimmar, allying with the Ironmarch forces in Blackrock Spire during the Iron Horde Incursion.