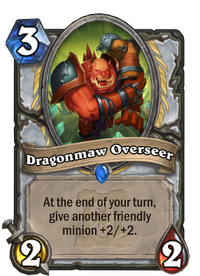 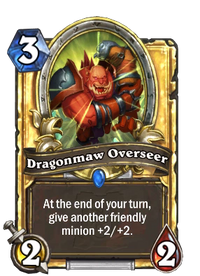 At the end of your turn, give another friendly minion +2/+2.

Dragonmaw Overseer is a rare priest minion card, from the Ashes of Outland set.

This minion is a reference to the Netherwing questline in which players disguise themselves as fel orcs in order to infiltrate the Dragonmaw forces on Netherwing Ledge and gradually rise through the ranks, with "Overseer" being the first new rank that players earn. This particular Dragonmaw Overseer is wielding a Booterang, which is used by players to whip Disobedient Dragonmaw Peons into shape for the daily quest The Booterang: A Cure For The Common Worthless Peon.