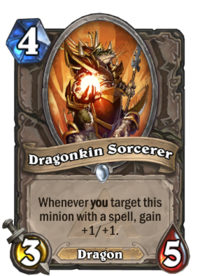 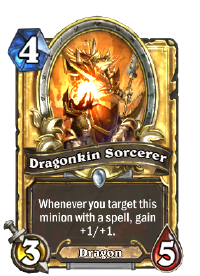 Whenever you target this minion with a spell, gain +1/+1.

Dragonkin Sorcerers be all "I'm a wizard" and everyone else be all "daaaaang".

Dragonkin Sorcerer is a common neutral minion card, from the Blackrock Mountain set.

As a Wild format card, both regular and golden versions of Dragonkin Sorcerer can also be crafted for the following amounts:

With average stats for a 4-drop, Dragonkin Sorcerer performs best in classes that have multiple buff spells, such as priest, paladin or druid. The continued stat growth makes this minion particularly favourable for trading and maintaining board advantage, although it is susceptible to hard removal.

Summon
Power flows through me.

“Dragonkin” refers to all the draconic races who aren’t full dragons, including the drakonids, or dragon hybrids. No one is quite sure how they came to be, but since dragons usually don’t mind meddling with mortals, it’s a safe bet that muddled mortal is a primary ingredient. These powerful and devoted spawn of the Black Dragonflight are Nefarian’s lieutenants within Blackrock Spire. Some of them thrive on magical forces, and if you’re not averse to sharing a little magical juice, you’ll be richly rewarded.[5]

Dragonkin are all creatures descended from and including dragons. Dragonkin sometimes refers specifically to a type of creature closely related to a dragon, but usually lacking wings or full dragon abilities, powers, and spells. Nearly all dragonkin belong to one of the main or lesser dragonflights.

The term dragonkin has been used to refer to a category that seemingly includes both dragonspawn and drakonids. Some dragonspawn are known as "dragonkin", like the Elder Dragonkin and the Twilight Dragonkin. Maxnar the Ashmaw, a drakonid, is described as "one of the dragonkin, half-man, half-dragon." The dragonkin originate when dragons empower mortal servants, changing them into something halfway. This process does not have to be willing. They are separate races from the dragon race. They became dragonspawn and drakonid thanks to the dragons they served (via intentional alteration or via "unintended side effect of hanging out with dragons"). 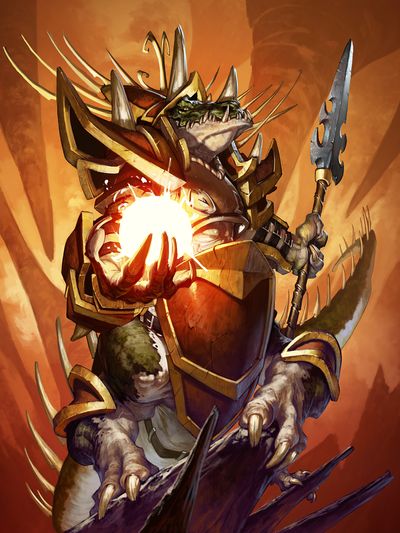