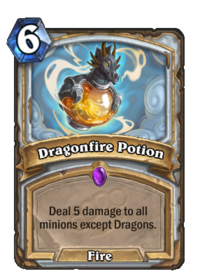 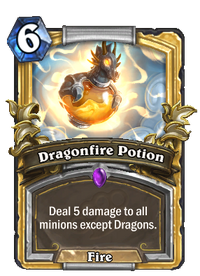 Deal 5 damage to all minions except Dragons.

No one was brave enough to fire the dragon in person… so they made the potion do it.

Dragonfire Potion is an epic priest spell card, from the Mean Streets of Gadgetzan set.

Dragonfire Potion can be obtained through Mean Streets of Gadgetzan card packs, or through crafting.

A highly effective board clear which compares well to the infamous Flamestrike; Dragonfire Potion costs 1 less mana while doing 1 more damage. The damage does apply to your own minions, but Priest decks focusing on Dragons can negate this downside. Control or combo-oriented decks that play less minions will also see great use for this spell.

However, enemy Dragons are also immune to the damage, rendering the Dragonfire Potion useless in removing them.

On the surface, this seems an odd potion for the overtly humanoid Kabal to be brewing, given its notably dragon-favouring effects. It certainly doesn't do much to dispel the rumours about Kabal leader Kazakus' scaly secret, or the "secret dragon people" infiltrating Gadgetzan in disguise.

This card's Dragon-related synergy may be based on Ysera's Ysera Awakens card, but rather than damaging the players, it damages all non-Dragon minions.