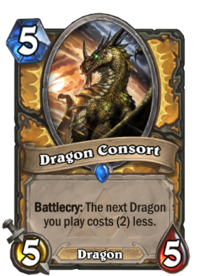 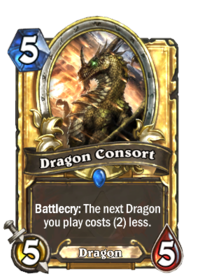 Battlecry: The next Dragon you play costs (2) less.

Everybody wants someone to snuggle with. Even giant armored scaly draconic beasts of destruction.

Dragon Consort is a rare paladin minion card, from the Blackrock Mountain set.

As a Wild format card, both regular and golden versions of Dragon Consort can also be crafted for the following amounts:

This card can be used with Ysera or other high cost Dragons to bring them out earlier in the game. This can give a Dragon-oriented paladin a significant edge in the late midgame and allows for more pressure towards your opponent, especially when the opponent is already struggling to maintain board control. This card can, to that extent, be used to solidify your own position around turn 7 (or turn 6 if you still have The Coin), after playing it the previous turn. However: care has to be taken that the cost drop is not spent on a lower cost dragon such as Faerie Dragon or Hungry Dragon so Dragon Consort works best in a deck that has few low-cost dragons and more high-cost ones.

The Aspects are aided in their tasks by their consorts, who are their companions, partners, and lovers. Typically, the consorts are chosen by traditional draconic courtship rituals; though a consort may be smarter or more powerful than the average dragon, only those loved by the Aspect will rise to the position. The consorts at any given time are led by the Prime Consort, the one who has held the position longest, or is else the most capable. Typically, an Aspect would have three or four consorts at any time.

For instance, passive abilities (a) indicate themselves by the source's continued presence on the battlefield, permanent effects (b) such as Shadowstep's are made clear by the permanently modified attributes they set, and short-term cards (c) such as Loatheb have less need of any interface clue since they last only a turn (in addition to the fact that the source is likely to still be on the board while it is in effect).
Unlike all of these, Dragon Consort creates a state of play that could still be active several turns later without any explicit indicator that playing one of the affected cards would end the effect for all other affected cards. This could be especially confusing if other cost-modifying effects are in play. 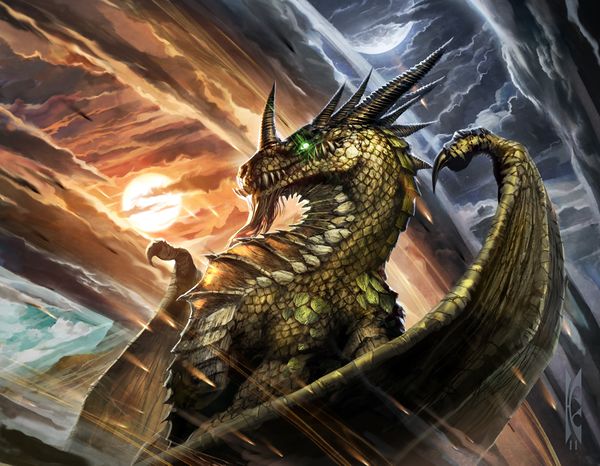