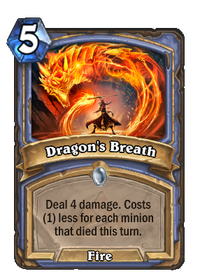 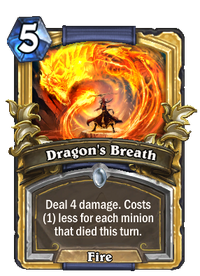 Deal 4 damage. Costs (1) less for each minion that died this turn.

Dragons breathe fire, sure, but did you know they can also breathe Cotton Candy? It's harder to give them a reason to do that, though.

Dragon's Breath is a common mage spell card, from the Blackrock Mountain set.

As a Wild format card, both regular and golden versions of Dragon's Breath can also be crafted for the following amounts:

Ideally you want to make this card cost 3 or less mana to get value. You can either trade minions or cast AoE like Flamestrike and then use this spell to pick off any remaining minion. If you can reduce this card's cost to 1 you can use it to trigger Gazlowe's effect.

At its base, unmodified cost, this card has some synergy with Big Spell Mage archetype, activating cards such as Dragoncaller Alanna and Arcane Tyrant.

Dragon's Breath is a mage spell from World of Warcraft that deals Fire damage to all enemies in a cone and disorients them.

There are a few rules when it comes to handling dragons, but the most important rule of all is this: Don’t stand in front of one—ever. Aside from a maw of sharp teeth to watch out for, dragon breath is incredibly good at reducing heroes to piles of ash. While it’s not minty fresh, Dragon’s Breath can be very powerful in the hands of a Mage on a minion-roasting rampage.[3] 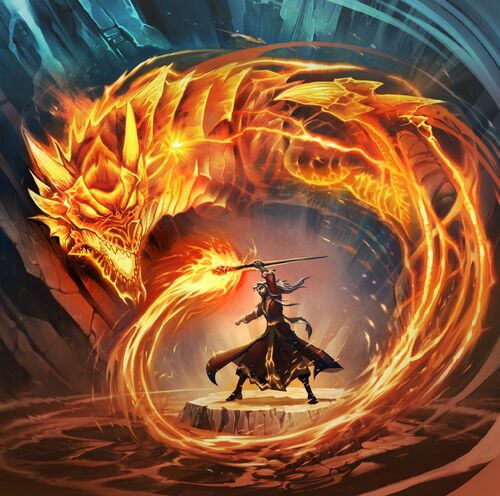