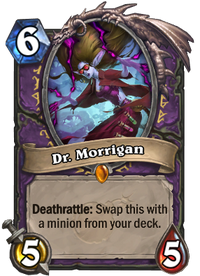 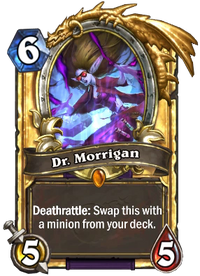 Deathrattle: Swap this with a minion from your deck.

She will NOT STOP until she gets tenure.

For the boss of the same name, see Dr. Morrigan (boss).

Dr. Morrigan is a legendary warlock minion card, from The Boomsday Project set.

Dr. Morrigan can be obtained through The Boomsday Project card packs, or through crafting.

Dr. Morrigan's poor stats makes her a weak play, but her Deathrattle can make up for it if your deck has a good amount of of high-cost minions to swap to.

This card works better in decks that can summon copies of Dr. Morrigan to use her Deathrattle. Dollmaster Dorian and Fel Lord Betrug works best for this purpose.

Morrigan is unique to Hearthstone.

Fine. I’ll divert my attention away from my vital research to waste time discussing my work with an appliance who won’t comprehend it, so you can report it to someone who won’t listen, so he can decide whether my work is up to standards that haven’t been set, because he never understood what I was working on to begin with. Does that sum things up? Hm?

In life, when I could still taste, feel, and experience happiness, I wasted precious hours studying mathematics. As a banshee, I chose to research a less unsavory subject: the emancipation, analysis, and practical application of souls. I have founded an entirely new field of study. I call it Soulology!

I’ve approached my studies methodically and precisely. What I’ve learned has enabled me to develop entirely new technologies to cheaply and efficiently harvest souls, refine them, and then focus them into to their purest essence. And I can do it with finer precision and with greater care than the clumsy manipulations managed by most Warlocks.

While the living are . . . crude in their base form, the souls they contain are truly remarkable! Once freed from their fleshy prisons, they soar free to become a readily accessible energy source far richer and more versatile than Stormsurge’s ludicrous light shows. And there are other perks as well: terrifyingly powerful weapons! Vast amounts of information delivered instantly! Fewer gnomes!

I’ve even developed a prototype that allows for soul essence transposition. Why travel from place to place, when you can simply swap essence with another creature that is already where you wish to be?

Of course, there are always challenges. . . . Zerek has been helpful, but I could always use more test subjects. And the souls are remarkably persistent in maintaining a connection with their erstwhile hosts. Also, while the Soularium grants access to impressive stores of knowledge, the sudden catastrophic memory loss is—admittedly—something of an inconvenience.

Still, I’m certain that Dr. Boom will agree that what I’ve accomplished here is among the most important breakthroughs in Boom Labs. Now, fetch me some more gnomes. I have work to do.