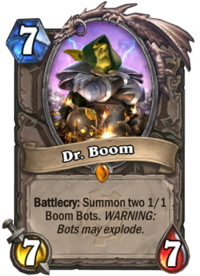 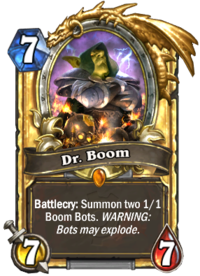 Dr. Boom is a legendary neutral minion card from the Goblins vs Gnomes set. Its Battlecry summons two Boom Bots.

Dr. Boom can be obtained through Goblins vs Gnomes card packs, or through crafting. 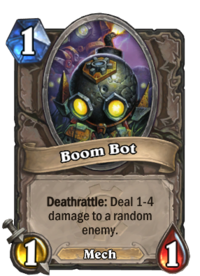 Dr. Boom is essentially a War Golem with the added bonus of the Boom Bots. This makes it very cost-efficient.

Due to their Deathrattle your opponent will be hesitant to destroy your Boom Bots, giving you an opportunity to make use of Mech-dependent minions like Cogmaster, Tinkertown Technician, or even Mimiron's Head. Likewise, the Boom Bots are excellent targets for Magnetic minions, especially Venomizer.

The Boom Bots can be used with Baron Rivendare for double damage. Note that the target for each burst of damage will be determined separately; the Boom Bots may therefore strike the same target twice, or two separate targets. If paired with Kel'Thuzad, the Boom Bots can serve as continuous damage output. Mages in particular can use the Fireblast Hero Power to repeatedly destroy them. Also, using Brann Bronzebeard you can get 4 Boom Bots.

Although Dr. Boom's glory days have long past, he is still an excellent finisher in decks based around Baku the Mooneater.