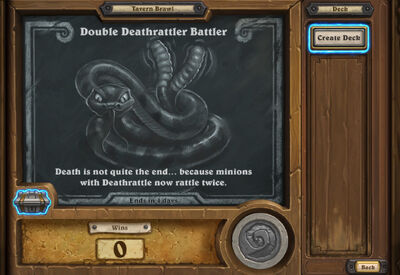 "Death is not quite the end... because minions with Deathrattle now rattle twice."

Double Deathrattler Battler is a Tavern Brawl. It debuted September 9, 2015. For exact times, see the schedule.

In this Brawl, any minion Deathrattle activated will take effect twice, adding value to minions with beneficial Deathrattles. Weapon Deathrattles are not affected.[1] Players are able to construct their own decks, using any class.

Deck types may depend on which Deathrattle minions are chosen. The Brawl's effect could improve board presence from sticky minions, increase card draw, or work to put Secrets rapidly into play. 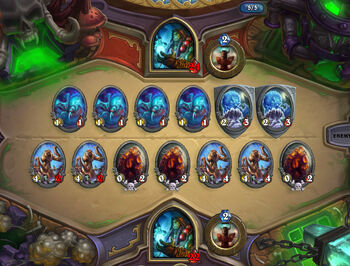 You can't make Nerubians without breaking a few eggs

It should be noted that not all Deathrattles are desirable for duplication. As well as obviously negative ones such as Zombie Chow, Darnassus Aspirant or The Beast, some such as that of Tirion Fordring and Malorne will gain no special advantage from activating twice, since the second activation will effectively overwrite the first. Some Deathrattles, such as those of Explosive Sheep and Abomination, could be desirable or undesirable depending on the type of deck. Baron Rivendare and Necromechanic should not be included because his effect does not stack with this Tavern Brawl.

Deathrattle synergy is also very effective, such as Undertaker, Feign Death, and Terrorscale Stalker. The latter two will also benefit from this Brawl's special effect, with each affected minion's Deathrattle triggering twice. N'Zoth is obviously an incredibly powerful card for this Tavern Brawl by doubling your already doubled Deathrattles.

Shamans have some powerful synergy options. Reincarnate is effectively a single-minion Feign Death, also serving to remove any damage and enchantments. Ancestral Spirit is even more effective, since it works via a Deathrattle - destroying the minion will actually result in 2 copies being re-summoned to take its place, in addition to double the consequences of its own Deathrattle. For example, trading a Haunted Creeper with Ancestral Spirit will result in 4 Spectral Spiders and 2 Haunted Creepers, while combining Ancestral Spirit and Reincarnate on 1 Piloted Shredder will result in 3 Piloted Shredders and 2 random 2-cost minions. Reincarnate is particularly useful for activating Nerubian Egg.

Destroying your own minions is often a strong strategy. Besides Reincarnate, Power Overwhelming is a strong warlock option, alongside Void Terror. Redemption can be effective if managed correctly for allowing multiple Deathrattle activations, as can Duplicate in a slightly different way. Sylvanas Windrunner is a particularly strong target for trading and self-destruction, especially when the opponent has the upper hand, or Taunts blocking your way. Sylvanas can be played from the hand and immediately destroyed with spells like Shadow Word: Death or Kill Command, resulting in two of the opponent's minions being stolen. This effectively turns any such two-card combo into a double Mind Control, albeit without control over which minions are taken.

Of course, the presence of so many Deathrattles in the Brawl's meta also provides ample opportunity for counters to take advantage of this trend. Lil' Exorcist and Scarlet Purifier are specifically anti-Deathrattle, while Silence effects such as Mass Dispel and Defias Cleaner can be very useful for negating the Deathrattles of the opponent, without which their board may be far less impressive. Hex, Polymorph, and Potion of Polymorph can also be effective.

One high-performing deck for this Tavern Brawl is Goblin Bomb Deathrattle Hunter. Using their cheap and numerous Deathrattle activators on Goblin Bombs lets them dish out face damage very quickly, and opponents are very unlikely to outpace their damage output.

Priests are a strong pick for this Tavern Brawl due to the many Deathrattle counter options they have access to, including a large selection of Silence cards like Mass Dispel, as well like minion-stealing effects like Shadow Madness and Potion of Madness to steal the Deathrattle effect for themselves.

This Brawl's focus on minions tends to lead to minion-heavy decks, and boards filled with smaller minions. This can make AoE removal like Lightning Storm, Whirlwind and Flamestrike very desirable. Due to the popularity of sticky Deathrattle minions, Mind Control Tech also becomes much easier to activate. It can also make minion-synergy cards more effective, particularly Bloodlust.

Dreadsteed will summon two Dreadsteeds when it dies, allowing you to build up an unkillable army of Dreadsteeds using a single card. This can backfire in the late game, however, when the opponent can intentionally fill your board with Dreadsteeds so that you cannot play anything else.

Jade Rogue is a strong deck to play, thanks to Jade Swarmer. If you can duplicate its effect with cards such as Unearthed Raptor and summon more Jade Golems through other means, you can quickly ramp up your Golem's strength.