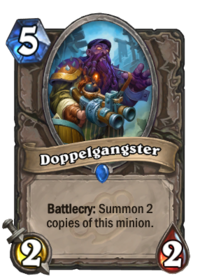 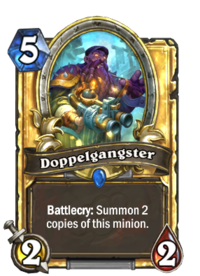 Battlecry: Summon 2 copies of this minion.

Doppelgangster is a rare neutral minion card, from the Mean Streets of Gadgetzan set.

Doppelgangster can be obtained through Mean Streets of Gadgetzan card packs, or through crafting. 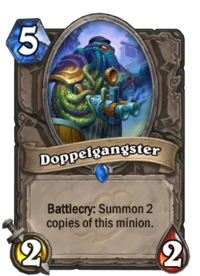 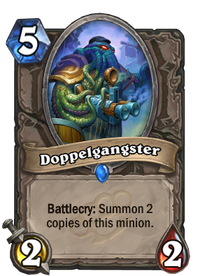 By itself, Doppelgangster is a decent minion, being equivalent to a neutral Force of Nature in minion form. However, this minion can be very powerful in combination with cards that buff minions in your hand, multiplying each such effect by a factor of three. Even a single +1/+1 effect makes it above average for its cost, and a greatly buffed Doppelgangster can be a win condition in itself. Examples include a Paladin deck centered around Val'anyr, or a deck using the various Grimy Goons handbuffs.

Doppelgangster also works well with Evolve, which can be used to spawn three 6-Mana minions with just two cards.

This card has especially good synergy with Blubber Baron: since they all have the Battlecry ability, both the original Doppleganster and each copy will activate the Baron's effect in turn. Note that summoning the copies will not trigger effects such as Rumbling Elemental that require Battlecry minions to be played from the hand.

Attack
All fer one!

Attack
Such a shame.
A pity.

While the Doppelgangster appears to be a simple dwarf, his Battlecry reveals a dark secret. Commanding a pair of n'raqi (faceless ones), the dwarf clearly has friends in some very low places, or possibly is one of the n'raqi himself. The latter notion is supported by his unusual appearance, namely his glowing orange eyes (while dark dwarves possess glowing red eyes, they also have dark gray skin, a trait not exhibited by the Doppelgangster).