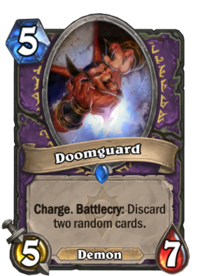 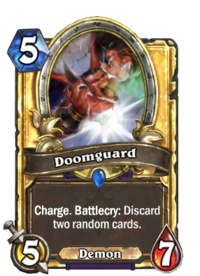 Summoning a doomguard is risky. Someone is going to die.

Doomguard is a rare warlock minion card, inducted into the Hall of Fame set, formerly from the Classic set.

Doomguard can be obtained through crafting only.

Doomguard is a powerful, aggressive minion with a strong drawback. It is commonly used as burst damage to finish games, although with a little planning it can also be used for efficient trading.

Doomguard is a fairly cost efficient minion with Charge, however the card's Battlecry makes it a painful card for the warlock to play. The best uses of the Doomguard are as a finisher, from an empty hand, or in aggro decks which aim to win in the early game, thus preventing or rendering irrelevant the subsequent card disadvantage that could otherwise ruin the warlock's late-game.

As with all discard effects, the main strategic counter to Doomguard's disadvantageous Battlecry is to play it with fewer than 2 other cards in hand. If Doomguard is the only card in the player's hand, the Battlecry will be negated, producing an extremely efficient 5/7 Charge minion for 5 mana. If a Doomguard is drawn with other cards in hand, the player can work toward this by using other cards and slowly emptying their hand, in preparation for playing Doomguard on a later turn. The drawback can also be minimised by discarding particularly weak or low value cards. Life Tap can allow warlocks to replace cards discarded by the Doomguard, thus converting the Doomguard's drawback to Health loss and extra mana cost. Life Tap also reduces the downside of intentionally emptying the hand before playing a Doomguard, since it can be quickly refilled.

Doomguard's stats allow it to trade at least 2-for-1 with many minions, and/or can force the opponent to trade multiple minions or spells in order to remove it. Using it as a burst card is fairly inefficient; Bluegill Warrior and Wolfrider both have the same deal (X mana for that much damage), without the side-effect. Doomguard's 7 health makes it very effective for removing threats and trading with multiple minions, although the efficiency of this depends on the number of cards discarded in order to play the Doomguard. Even when used as burst damage, Doomguard's high Health makes it harder for the opponent to remove, increasing the likelihood of it being able to deal damage again the next turn, or at least delaying the opponent's other actions.

Doomguard is especially effective if it can be brought out without triggering its Battlecry, like Voidcaller, Possessed Lackey, or Skull of the Man'ari, allowing the player to pull the Doomguard out and attack with it on the same turn without discarding anything. It's also just as powerful when resummoned with Carnivorous Cube or Bloodreaver Gul'dan, creating multiple Charging minions that can be used as a finisher.

Having two Doomguards in hand is a difficult situation to resolve, since the Battlecry of one is likely to discard the other. Life Tapping for more cards can reduce the chance of this happening, although the drawback of the first Doomguard will be suffered fully.

Summon
Who dares summon me?

The doomguard, or doom guard, are a type of demonic warrior of the ered'ruin species that used to work as Archimonde's personal escort, and continue to serve the Burning Legion with great fervor.

Later expansions saw the Doomguard changed into a simpler DPS cooldown, directly summonable as a temporary minion. While no longer prone to attempts to kill the summoning warlock, the Doomguard retains his soundbites from his earlier incarnation, and will occasionally make remarks regarding his plans for the warlock's demise as soon as he can break free of their control.

Commentary: As masters of Demons, Warlocks have long been a powerful board-control class. While we like that minion combat is as much a part of the Warlock's identity as destructive magic, we want to acknowledge and embrace the class's weaknesses when they lose control of the board. To that end, we want to limit the amount of damage a Warlock can deal from their hand. As a powerful Charge minion, Doomguard pushes against the Warlock class identity, so we are moving it into the Hall of Fame.