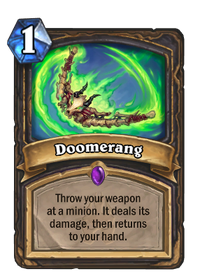 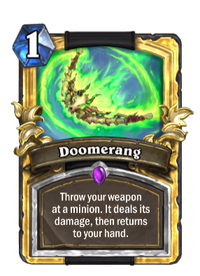 Throw your weapon at a minion. It deals its damage, then returns to your hand.

Guaranteed to return your weapon directly to your hand! (Wear gloves. Thick ones.)

Doomerang is an epic rogue spell card, from the Knights of the Frozen Throne set.

Doomerang can be obtained through Knights of the Frozen Throne card packs, or through crafting.

This card functions as a very cheap removal effect for weapon-based Rogue decks. It is good for either dealing your weapon damage twice (without taking any damage on the second hit) or destroying a minion through Taunts. Because this card works with weapon buffs, in a pinch it can be used for hard removal with Envenom Weapon or heal again with Leeching Poison.

Doomerang returns a fresh copy of the equipped weapon, which allows you to recycle the equipped weapon. Therefore it's preferable to use this with a weapon stronger than your basic Wicked Knife. This effect can even be used to re-use a weapon's Battlecry, and in case of Kingsbane, refreshing its Durability.