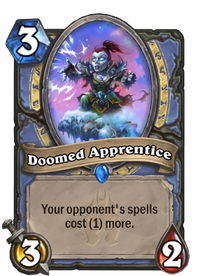 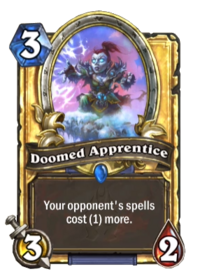 Jaina was never good at keeping up apprentices.

Doomed Apprentice is a rare mage minion card, from the Knights of the Frozen Throne set.

Doomed Apprentice can be obtained through Knights of the Frozen Throne card packs, or through crafting.

Doomed Apprentice is generally considered a weak card, as it has poor stats for its cost and a low-impact effect. The increased mana cost for your opponent's spells will not usually impede their plays much, as this card is easily removed thanks to its low health, whether by minions, weapons, or cheap spells like Frostbolt or Backstab. Sorcerer's Apprentice is usually a better option, as it has a lower cost and a much better effect for Mage decks.

Summon
Someday you'll be just like me!
Attack
*mad laughter*

The Doomed Apprentice appears to be a death knight version of Sorcerer's Apprentice, which is reflected in her card text and quotes.[1]