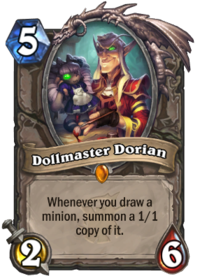 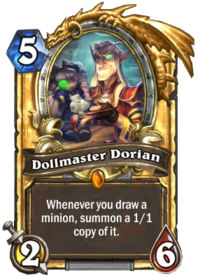 Whenever you draw a minion, summon a 1/1 copy of it.

The children were puzzled by the scratches covering the insides of their toy-boxes.

Dollmaster Dorian is a legendary neutral minion card, from the The Witchwood set.

Dollmaster Dorian can be obtained through The Witchwood card packs, through crafting, or as an Arena reward.

Dollmaster Dorian is most effective when used in a deck that focuses on card draw with creatures that have passive, Deathrattle, or end of turn effects such as Ysera, Archmage Arugal, Tirion Fordring, and The Lich King.

Card draw mechanics such as Elven Minstrel, Sense Demons, or Sandbinder can guarantee minions to trigger its effect. Combos most effectively with Plot Twist, drawing as much cards as you have.

Priest can use Silence effects to return minions to full stats immediately.

Shaman can use Grumble, Worldshaker and Rogues can use bounce mechanics to return minions back to hand and replay them at full stats.

Summon
This one turned out nicely.
Attack
No strings on me!

Dorian is unique to Hearthstone.

He makes puppets, did you know?

(This report is to be disregarded. It was delivered by a doppelganger of the agent we sent to investigate Dorian’s possible association with the Crowskin cult. The duplicate has been disposed of, but we still do not know the whereabouts of the missing agent.)[1]