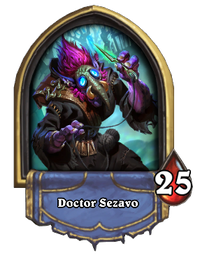 It's good to give blood. But not to him. He's not a real doctor.

Doctor Sezavo is a boss that can be encountered during the Monster Hunt.

Since Sezavo can flood the board, always keep your cannon in the middle. There is a high possibility you will always have to targets to hit.

For Shaw, you simply have to out pace him. Start putting down minions every turn and use your hero power when necessary. Don't leave one health minions on the board.

As Toki, you must make sure that he does not over flood the board. Your ability of wining lies solely on your cards and your random effects. Rewind time if a minion has not been killed by randomness.

Make use of the cards with deal damage effects. Kill all the boss's minions and build your board.

Hagatha The Witch
You are all a disease. Sezavo has the cure.

Doctor Sezavo
Come! Sit down. Show me where it's gonna hurt.

Eh! You're doing it all wrong.
Let me handle that for you.

Doctor Sezavo
An ounce of prevention is worth a pounding!

Doctor Sezavo is unique to Hearthstone. He is a minion of Hagatha.