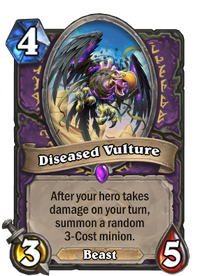 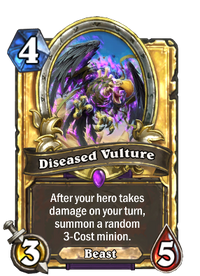 After your hero takes damage on your turn, summon a random 3-Cost minion.

He's off the twig! He's kicked the bucket! THIS IS AN EX-VULTURE!

Diseased Vulture is an epic warlock minion card, from the Saviors of Uldum set.

Diseased Vulture is a significant tempo generator when its effect goes off. It can most easily be activated with Life Tap and other self-damaging cards like Flame Imp and Hellfire, but it works especially well with Neferset Thrasher, which you can follow up on curve.

Diseased Vultures are vultures found flying around the Cradle of the Ancients in Uldum. Upon killing one of the birds, players are automatically given the quest Dirty Birds, in which they're tasked with ridding the cradle of the "nasty vultures" to make it a "somewhat less despicable place to travel through".