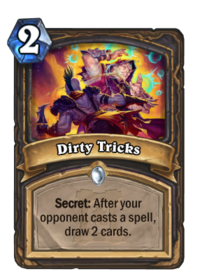 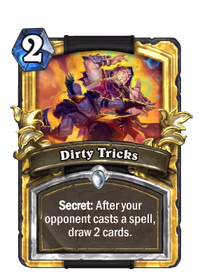 Secret: After your opponent casts a spell, draw 2 cards.

"Ahh sand in my eyes! Also, I'm being stabbed."

Dirty Tricks is a common rogue spell card, from the Ashes of Outland set.

Dirty Tricks can be obtained through Ashes of Outland card packs, through crafting, or as an Arena reward.

Most decks will play spells fairly regularly, making this card in essence a delayed draw two for 2 mana. However, the ease of activation makes it a bad card to set and stay in play to use Blackjack Stunner on a later turn, since it's not likely to last that long. With only this Secret in your hand, it's often better to play both on the same turn.

Dirty Tricks is an Outlaw rogue talent that causes Gouge, Blind, Cheap Shot, and Sap to cost no Energy.