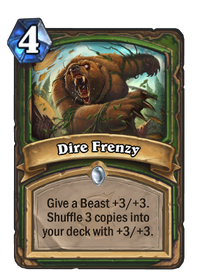 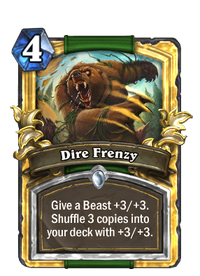 Dire Frenzy is a common hunter spell card, from the The Witchwood set.

Dire Frenzy can be obtained through The Witchwood card packs, or through crafting.

Dire Frenzy (Core) is uncraftable and cannot be crafted or disenchanted.

Dire Frenzy allows you to generate additional copies of a Beast (each buffed by +3/+3) to be drawn later. It can be used on high-value Beasts like Savannah Highmane to improve your draw potential in the late game, but is more commonly cast on 1-cost minions that Tol'vir Warden and Witchwood Piper can target draw. Stonetusk Boar is a favoured recipient due to Charge. In a similar vein, Huffer and the tokens summoned by Unleash the Hounds are good targets. A buffed Young Dragonhawk in conjunction with Tundra Rhino can create a powerful burst combo due to the pairing of Charge and Windfury. Tracking can also help in searching out buffed copies.

Stitched Tracker can be used to duplicate the buff effect, allowing for you to easily get a copy of the buffed minion in your hand once they have been shuffled into your deck.

Augmented Elekk can be used to double shuffling effect which increase the number of copies in the deck. It works with Augmented Elekk itself on the board or on a friendly minion nearby.

Dire Frenzy is a level 30 talent for Beast Mastery hunters that replaces the Dire Beast ability. Dire Frenzy causes the hunter's pet to perform a flurry of 5 attacks on the target, gaining increased attack speed for 8 sec and generating Focus for the hunter.