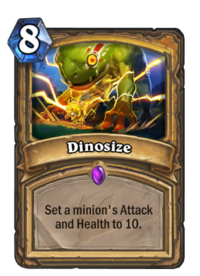 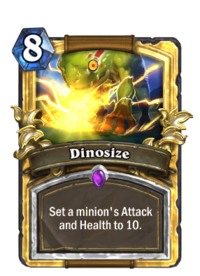 Set a minion's Attack and Health to 10.

Comes with fries and a drink.

Dinosize is an epic paladin spell, from the Journey to Un'Goro set.

Dinosize can be obtained through Journey to Un'Goro card packs bought through the ingame Shop, purchased online from the Battle.net shop, or through crafting.

Dinosize sets a minion's both stats to 10/10 instead of adding them to the current stats.

The best use of this card is to use it on a Taunt minion to ensure that it will defend the player or other friendly minions; or to use it on a minion that survived the last turn or on a cheap Charge minion, to immediately deal huge amounts of damage. A more unusual usage of the card can also be to weaken an enemy minion that has more than 10/10 stats, such as Deathwing or The Ancient One.

This card's art depicts a murloc grown to tremendous size after getting near a yellow crystal.