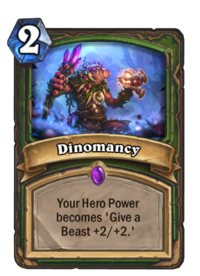 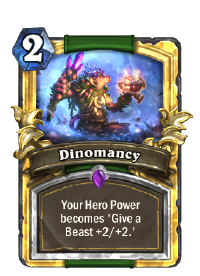 Anyone can dinomance. Just put your lips together and RAAWWWAARGGGH.

Dinomancy is an epic hunter spell card, from the Journey to Un'Goro set.

Dinomancy can be obtained through Journey to Un'Goro card packs, or through crafting. 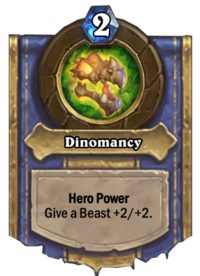 The Hero Power created by this spell is extremely powerful. However, it requires a Beast in play in order to be used. It also permanently removes the option to use Steady Shot, limiting the Hunter's ability to pressure an opponent. If you can get a beast to attack each turn, this is still on par with Steady Shot, with the added bonus of buffing your minions and allowing for flexibility in where you send your additional two damage.

Although casting multiple instances of this spell has no effect aside from resetting the Hero Power (unlike Shadowform), two can still be included in your deck to increase consistency.

Dinomancers are are individuals who have mastered the art of controlling dinosaurs, occasionally even being able to shapeshift into the great beasts. They are primarily found among the Zandalari trolls, but the Un'Goro Madness micro-holiday in World of Warcraft features Akaridal, a saurok dinomancer of the Skumblade tribe.