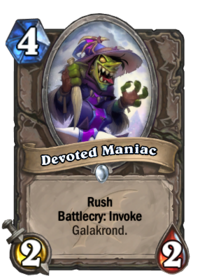 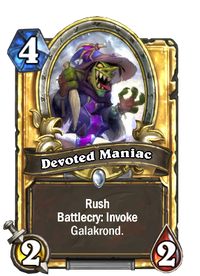 There are plenty of apathetic maniacs, but they couldn't be bothered.

Devoted Maniac is a common neutral minion card, from the Descent of Dragons set.

Devoted Maniac can be obtained through Descent of Dragons card packs, through crafting, or as an Arena reward.

This minion is a bad pick simply for its statline - Swift Messenger is always better. The purpose of this card is to use it in a Galakrond deck that requires more Invoke. Each classes uses Devoted Maniac slightly differently, and gains better or worse value from its statline and effect.