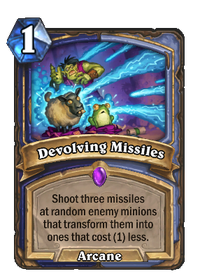 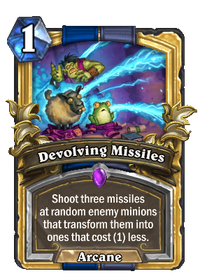 Shoot three missiles at random enemy minions that transform them into ones that cost (1) less.

Most intermural spell-dueling contests end with a field of wisps.

Devolving Missiles is an epic shaman/mage spell card, from the Scholomance Academy set.

A random based Devolve effect. It is unreliable but it is able to devolve a single minion more than once.

Devolving Missiles is a good answer against Taunt or powerful Deathrattle or Reborn minions. By transforming them to lower cost minions, you can prevent them from being resummoned from resurrection effects.

Be careful playing Devolving Missiles against multiple high-cost minions. You may give the opponent more stats or different positive effects, since the minions will likely not be hit too many times.

"Forget arcane missiles, Devolving missiles are far more devious! Using this combination of Mage and Shaman powers you can empower your missiles to transform enemy minions into lesser minions."[2]