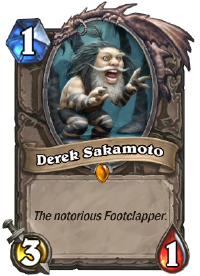 Derek Sakamoto is Senior UI Designer on the Team 5 Hearthstone development team. He is featured in the credits card of the same name.

In March 2015, Sakamoto had been at Blizzard for a little over 12 years.[1] His first job for the company was designing the UI (user interface) for World of Warcraft.[1] He worked on WoW for 6 years, from Vanilla through to Wrath of the Lich King.[1]

The card art for Sakamoto's credits card was created by .