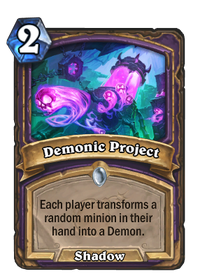 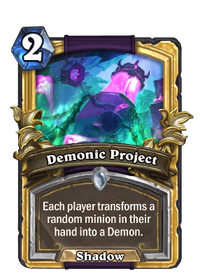 Each player transforms a random minion in their hand into a Demon.

Another group project where Jaraxxus doesn't do any work.

Demonic Project is a common warlock minion card, from The Boomsday Project set.

Demonic Project can be obtained through The Boomsday Project card packs, or through crafting.

This Spell's main function is to disrupt Combo deck strategies by replacing key components with Demons. Against non-Warlock decks, the minion granted is also unlikely to have synergy with the opponent's deck. However, the random nature of this Spell means that you can still fail to remove a key card if the opponent is holding sufficient minions. If you have strong, desirable minions in your hand, you also run the risk of transforming a good card into a less desirable replacement.

Due to the above, timing is important when playing this Spell. You can play this Spell when you have no minions in your hand, or a few minions which you don't mind transforming. Scenarios where your opponent has thinned their deck considerably are good opportunities to play this Spell, as it is likely they have at least a few vital components in the hand, increasing the likelihood of nullifying key cards such as Malygos or Mecha'Thun.