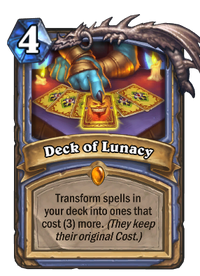 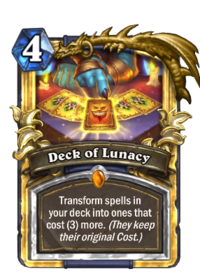 Transform spells in your deck into ones that cost (3) more. (They keep their original Cost.)

Deck of Lunacy is a legendary mage spell card, from the Madness at the Darkmoon Faire set.

Deck of Lunacy can be obtained through Madness at the Darkmoon Faire card packs, through crafting, or as an Arena reward.

Deck of Lunacy is a powerful card when played early. In order to take advantage of it's effect, it is a good idea to have as many spells in your deck as possible, since many spells upgraded by the Deck of Lunacy will summon minions themselves. Playing Deck of Lunacy followed by Incanter's Flow can be a great source of cheap but extremely powerful spells.

During early game, be sure to play it as soon as it's drawn, even if it's at the cost of losing tempo or sustaining some damage or both. It will soon redeem itself over the coming turns and give you an overall advantage.

While it can be devastating for your opponent if you find Deck of Lunacy in hand during mulligan or in early game, your deck should be competitive in itself as there can be a good possibility that you end up not drawing it and thereby losing the game.

The Lunacy Deck is a deck of Darkmoon Cards that can be crafted by combining the Ace through Eight of Lunacy. Handing it in to the Darkmoon Faire awards Darkmoon Card: Madness trinket. The Madness card is also depicted on this card's art.