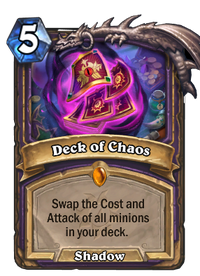 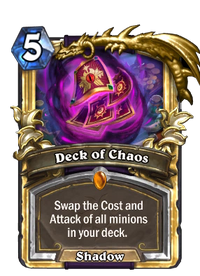 Swap the Cost and Attack of all minions in your deck.

Yeah, it's chaos, but it's organized chaos.

Deck of Chaos is a legendary warlock spell card, from the Madness at the Darkmoon Faire set.

Deck of Chaos can be obtained through Madness at the Darkmoon Faire card packs, through crafting, or as an Arena reward.

Similar to Luna's Pocket Galaxy, Deck of Chaos can give the rest of your deck a significant discount for a turn of tempo loss, while improving the attack of the minions. However, you will need to include cards that can benefit from it.

Many Warlock cards that are already staples in control decks benefit from Deck of Chaos. Warlock Legendaries like Keli'dan the Breaker, Valdris Felgorge, Soulciologist Malicia, Archwitch Willow, Zzeraku the Warped, and even Lord Jaraxxus all benefit from significant mana discounts. Aranasi Broodmother, Abyssal Summoner, and Khartut Defender, the backbone of defensive minions, all gain large discounts as well. Deck of Chaos can work in these decks without significant build-arounds as a result.

If you do decide to use Deck of Chaos in your deck, don't include too many cards that are only good with swapped stats. If you draw them before playing Deck of Chaos, they'll be stuck with their normal stats.

The Chaos Deck is a deck of Darkmoon Cards that can be crafted by combining the Ace through Eight of Chaos. Handing it in to the Darkmoon Faire awards Darkmoon Card: Berserker! trinket.