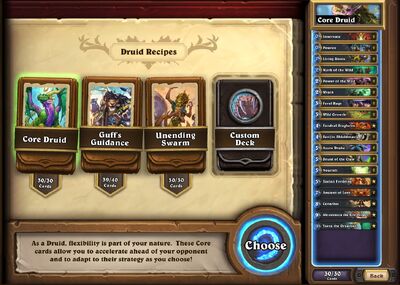 Deck Recipes are premade card lists which players can use when creating a new deck. When creating a deck from a Deck Recipe, cards which the player does not possess can be substituted, with alternative suggestions provided.

Deck Recipes are intended to give newer players an easy way to explore new deck types, simultaneously helping them to learn about synergies and deck building. They also provide a guide to reliable and competitive playstyles for each class. For experienced players, they can provide a convenient starting point when creating new decks, and ideas for new deck types to explore. Deck Recipes are comparable to deck lists found online, but integrated into Hearthstone itself, and with the cards automatically selected from the player's collection.

Deck Recipes are significantly more advanced than basic decks, and are generally aimed at players who have already expanded their collections a fair bit, due to the variety and rarity of cards featured in each Recipe. New players will usually lack the cards to fill Deck Recipes, and should generally use the basic decks or create custom decks based around Basic cards until their collection has grown somewhat.

Deck Recipes only include cards usable in Standard format, ensuring their validity in all types of play.

If Whizbang the Wonderful is in your deck, the deck will be replaced with one of the random non-Classic deck recipes at the start of the game.

Each Deck Recipe is a class-specific deck list, most having a specific theme. Each Recipe has a title, description and art taken from a fitting card.

Each class has three Deck Recipes, one 'classic' and two 'themed'.

Many Deck Recipes share a number of cards in common with the other Recipes for that class. Such cards are usually fairly key or 'core' cards for the class, and their indication in multiple Recipes can generally be taken as an indication of their versatility, unusual power, or inherent synergy with the class' Hero Power and/or other cards. 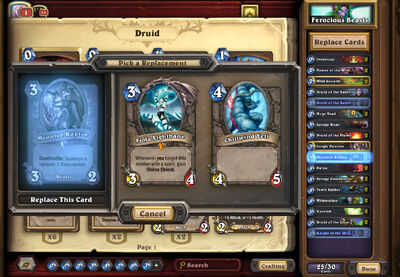 When creating a new deck, players are given the choice of creating a blank "custom deck", or using one of three Deck Recipes available for that class. Clicking a Deck Recipe previews the deck list in the right hand pane, along with the deck's description in the bottom pane. Recipe cards which are missing from the player's collection are shown in blue.

Upon choosing a Deck Recipe, the player is taken back to the usual collection screen, where they will find a new deck filled with all the cards from the Recipe that they own. Golden copies of cards will be included instead of regular copies wherever possible. Any missing cards are still highlighted in the deck list in blue, and right-clicking will bring up the crafting interface for that card. Left-clicking a missing card will open the card replacement window, providing two alternatives that the player already owns to replace the missing card.

Once all missing cards are replaced, the Deck Recipe process is complete.

The lists below are the deck recipes available in-game at the moment. For the previous or removed recipes, see Deck Recipe/Patch changes.

Cards common to multiple decks include Innervate and Wild Growth, helping to quickly ramp up the druid's mana supply, or put a powerful minion into play a few turns in advance; and Swipe, a powerful combination of single target and AoE damage.

Cards common to all decks include Frostbolt and Fireball, providing either single target removal or burst damage to end the game, and Flamestrike, very effective for removing large numbers of small or medium enemy minions. Mana Wyrm is a good early game play, especially in combination with cheap spells like Frostbolt and Arcane Missiles, which is also useful for countering early game aggression. Arcane Intellect is good for any late game deck, providing a cheap source of card draw.

Cards common to all decks include Equality and Consecration, a powerful combo to remove all enemy minions from the board regardless of their Health. Truesilver Champion is strong and useful form of removal, with its healing partially compensating for damage taken from attacking minions.

Cards common to multiple decks include the standard rogue removal spells Backstab, Shiv and Eviscerate; Sap for countering big minion and breaking the opponent's tempo; Sprint for card draw; and Deadly Poison and Blade Flurry, useful sources of damage alone, but even more so in combination.

Cards common to multiple decks include the staple weapon Fiery War Axe, primarily for early game and weaker minion removal; Whirlwind, for AoE removal, but often more importantly the damaging of the warrior's own minions; Shield Block, a tempo-slowing card that generates Armor; and Execute for big or problematic minion removal. All decks feature some amount of damage synergy, with cards that gain additional effects when damaged: Grom Hellscream is often the primary win condition of the deck, easily activated by Inner Rage or Cruel Taskmaster; Frothing Berserker is a powerful damage-triggered minion, and potentially a win condition in its own right; other minions like Amani Berserker and Raging Worgen also provide damage synergy; while Battle Rage generates cards from the many damaged characters.

Deck Recipes have been constantly renewed and removed throughout the updates. Most of major changes occur whenever a new expansion is released.