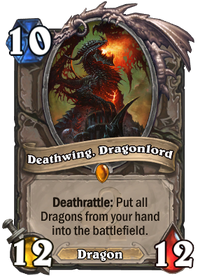 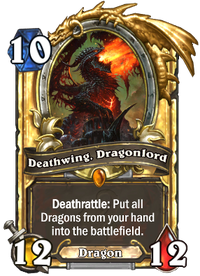 Deathrattle: Put all Dragons from your hand into the battlefield.

To his credit, Deathwing really took to heart the feedback he was receiving that he needed to be "more of a team player".

Deathwing, Dragonlord is a legendary neutral minion card, from the Whispers of the Old Gods set.

Deathwing, Dragonlord can be obtained through Whispers of the Old Gods card packs, or through crafting.

This card fits in a Dragon-heavy control deck, where its Deathrattle can provide a strong tempo advantage in the later game.

Activating Deathwing's effect can be a little tricky, since it largely depends on the opponent's board. On the upside, the presence of Deathwing on the field can provide a good amount of frustration for the opponent, who will likely be unwilling to destroy it, despite its potential to destroy them. In this respect it is a little similar to Sylvanas Windrunner, but a lot harder to remove.

Needless to say, the value of Deathwing lies in having substantial value in Dragons waiting in the hand for his Deathrattle to pull. This value could come from multiple Dragons, or potentially even a single high-cost or high-value Dragon. Playing Deathwing before you have a good number of Dragons in hand is risky, but given that his defeat often takes a turn or two, letting a crucial play pass you by just because you haven't yet drawn the right Dragons is not always the better strategy.

Because Deathwing doesn't activate Battlecries, be aware of the antagonism between him and Alexstrasza, Onyxia, Nefarian and especially the Drakes, and be careful when playing Deathwing with any of these in hand. With that said, Deathwing's effect is strong enough that in the right situations trading these Battlecries in for a matching tempo boost is often quite desirable, and effective - pulling multiple 8/8 bodies onto the board in a single turn for 0 mana is often enough to win the game. And in the case of dragons with potentially detrimental Battlecries, such as Hungry Dragon and the classic Deathwing, this effect can be a net gain.

As one of the strongest Deathrattle minions available, Deathwing works well in a N'Zoth deck. Even without any dragons in your hand, its 12/12 stats body makes it a very difficult minion to remove in long games, especially if it is protected by Deathrattle minions with Taunt such as Chillmaw.

Do note that if this minion dies on the opponent's board and they are controlling Duplicate, the two generated Deathwings will be placed onto their board, so be careful of destroying this minion if the opponent has a Mage Secret.

Summon
The dragons shall kneel before me! 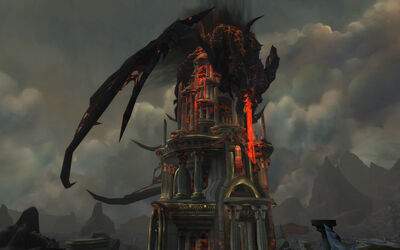 Deathwing, Dragonlord, destroyed atop Wyrmrest Tower in the End Time

"The sun has set on this mortal world, fools. Make peace with your end, for the Hour of Twilight falls!"

The description of Whispers of the Old Gods as offering a glimpse into an alternate reality, where the Old Gods are awakened and rule Azeroth, appears to loosely match the concept of the Hour of Twilight, although if this is so, the Hour must have been recent, since the world has not yet been scoured of all life as seen in the End Time.

The Hour of Twilight is the fulfilment of a chain of events instigated by the Old Gods many aeons ago. It is prophesied as the moment when the Old Gods will finally be freed from their ancient prisons, and will return to end all life on Azeroth.

A very ancient prophecy speaks of the Hour of Twilight--Azeroth's final moments of existence. At the last sunset, the Old Gods, sealed away within the depths of the world long ago, will enact their judgment and irrevocably twist the mortal world to reflect their essence. It possibly started with the reopening of Ahn'Qiraj, when the Old God C'Thun stirred from its slumber beneath the lands of Silithus.

The Dragon Aspects were created to stop such an event from occurring, where they would give their powers to prevent it. Using this to their advantage, the Old Gods corrupted Deathwing as a way to make their plan "foolproof", using one of the very aspects destined to stop the Hour of Twilight, to instead usher it. 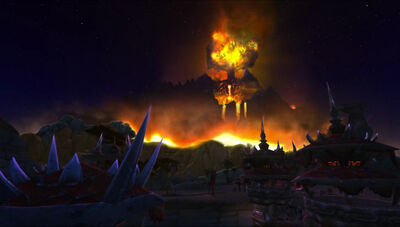 The Hour of Twilight, as revealed in prophecy by Ragnaros

A chain of events is set in motion where the Old Gods are rising, their ancient machinations are finally paying off, and Deathwing is their greatest pawn upon the board. While the insane Aspect believes himself to have his own purposes, his mind and soul were devoured by the Old Gods from the onset, and in this final hour the former Earth-Warder of the Titans has become the ultimate weapon for the Old Gods to unleash.

In Ysera's vision of the Hour of Twilight, all the five Aspects, including Deathwing himself, lay dead and broken at the ruins of the Wyrmrest Temple, having been destroyed by their own powers. Every lifeform on Azeroth will be dead and rotting, except twilight dragons. This outcome was also a possible future if Thrall would not step in the place of Neltharion as the aspect of earth, and remained in the Horde instead of appointing Garrosh as his replacement.

Deathwing's attempt at fulfilling the Hour of Twilight was finally stopped when he was vanquished at the Maelstrom by the Dragon Aspects, Thrall and mortal champions of the Horde and the Alliance. However, this victory came at a great cost, with the dragonflights' losing the majority of their power and immortality, as they had at last fulfilled their ancient purpose.