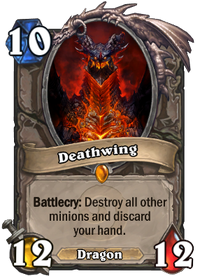 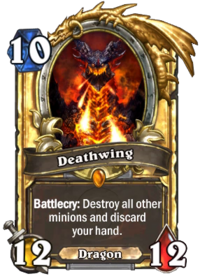 Battlecry: Destroy all other minions and discard your hand.

Once a noble dragon known as Neltharion, Deathwing lost his mind and shattered Azeroth before finally being defeated. Daddy issues?

Deathwing is a legendary neutral minion card from the Classic set.

Deathwing can be obtained through Classic card packs, through crafting, or as an Arena reward. Regular Deathwing can also be obtained as a first-time reward for first time reaching Legend in Ranked mode.

Deathwing is a very risky but potentially very rewarding card. It has high stats for its cost, and its Battlecry can be devastating to both you and your opponent. This minion is meant to end games, one way or another. You could destroy all your opponent's minions and win on the following turn; or you could discard your entire hand and be left with only a single minion on the battlefield that the opponent can easily remove on their turn with a destroy or transform effect.

The fewer cards the opponent has in their hand, the lower the chance of them having good removal or counter options. A good strategy is to try to estimate what removal options the opponent's deck likely uses. For example, if you are playing against a Mage who has not used any Polymorphs yet, and you notice a card in their hand that they have been holding for the last several turns, you may have good reason to believe they have a Polymorph up their sleeve. If possible, try to bait out big removal options with other minions before playing Deathwing.

Even though his Battlecry sweeps away all opposition, Deathwing can be easily foiled if the opponent summons the right Taunt minion on their turn, even a low-Cost minion. For example, Annoy-o-Tron and other Divine Shield and Taunt minions can prevent Deathwing from reaching the enemy hero for two full turns, effectively preventing 24 damage for as little as 2 mana, and Stubborn Gastropod can force Deathwing into attacking it with its Taunt and destroy it immediately with its Poisonous effect. Freeze effects such as Blizzard and Frost Nova can also stop Deathwing in his tracks.

Minions with Deathrattle effects that summon one or more minions, such as Harvest Golem and Haunted Creeper, can allow the player to maintain a board presence despite Deathwing's Battlecry.

Summon
I am power incarnate!

Attack
All will burn! 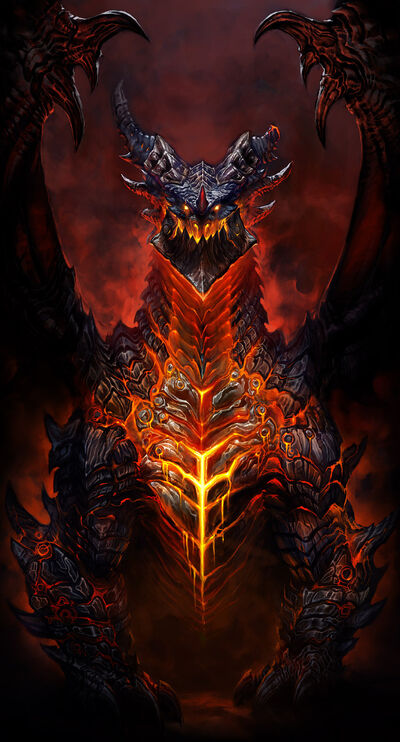 "Pain... Agony... My hatred burns through the cavernous deeps. The world heaves with my torment. Its wretched kingdoms quake beneath my rage. But at last... The whole of Azeroth will break... And all will burn beneath the shadow of my wings."

Black Dragon Aspect of Earth and once noble defender of Azeroth, Neltharion was corrupted by the Old Gods, especially N'Zoth, and turned against his former allies, becoming one of the greatest threats Azeroth has known. After a lengthy absence from the world, Deathwing explosively resurfaced, causing what would become known as the Cataclysm, changing the face of Azeroth forever. He was eventually destroyed during the final events of World of Warcraft: Cataclysm.

Deathwing is the mate of Sintharia, father of Nefarian, Nyxondra, Sabellian and Onyxia, and grandfather of Wrathion. He is one of five original Dragon Aspects, alongside Alexstrasza, Ysera, Malygos, and Nozdormu.

Deathwing the Destroyer, formerly known as Neltharion the Earth-Warder, was one of the five Dragon Aspects and leader of the black dragonflight. Thousands of years ago, Neltharion was empowered by the Titans with dominion over the earth and the deep places of Azeroth. However, driven mad by the Old Gods especially N'Zoth, he turned against the other Aspects during the War of the Ancients. eventually abandoning his title of Aspect of Earth in favor of being the Aspect of Death. Among both mortals and dragons his name became one whispered with a feeling of fear and contempt.

The black aspect involved himself in the Second War, adopting the form of Lord Daval Prestor in order to destroy the Alliance from within. He also managed to turn his greatest enemy, Alexstrasza, into a slave of the Horde, with which he later allied himself. After a series of setbacks, culminating in his defeat at the hands of the other Aspects, Deathwing retreated to the elemental plane of Deepholm to recuperate. From there, he observed his former mate Sintharia's experiments with the twilight dragonflight in Grim Batol.

Though believed dead by many, Deathwing returned in spectacular fashion after the fall of the Lich King. His wrath resulted in the Shattering, which reshaped the map of Azeroth and unleashed widespread destruction; as the world reeled, he also appeared and brought flame to various regions of Azeroth. His ultimate goal was to bring about the Hour of Twilight - the final end of all life on Azeroth. To that end, he was aided by powerful allies, minions of his Old God masters. These included the warped ogre-mage Cho'gall and his Twilight's Hammer cult, the powerful Elemental Lords Al'Akir and Ragnaros, and the Neferset tol'vir of Uldum.

Uniting their powers, the remaining Dragon Aspects sent adventurers to brave the unstable paths of the Caverns of Time to retrieve the Dragon Soul, an ancient artifact crafted by Deathwing himself ten thousand years earlier and destroyed shortly after the Second War, and believed to be the only means of defeating him. With the weapon secure, the Aspects took the battle to their corrupted brother, with the orc shaman Thrall as the wielder of the Soul, now imbued with Deathwing's essence - the very essence of the earth itself. After laying siege to the Wyrmrest Temple and unleashing his most powerful minions, Deathwing took to the skies, until he was blasted into the Maelstrom by the powers of the Soul. His body at last giving way to the corruption within, Deathwing made his final stand in the raging torrent of the Maelstrom, until he was at last destroyed by the combined powers of the shaman, the Aspects, and the mortal champions sent to defeat him.