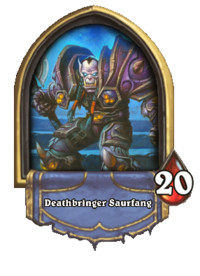 This Death Knight plays for keeps. Better bring a weapon.

Deathbringer Saurfang is a boss found in the Knights of the Frozen Throne mission. He is the second boss of the mission's Lower Citadel wing. 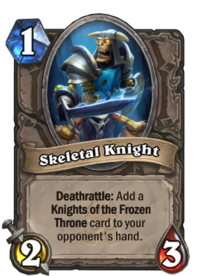 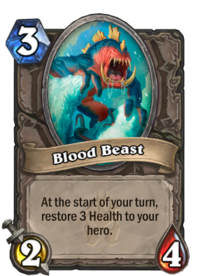 Since Saurfang is immune to all sorts of damage except from weapons, you obviously need to play a weapons class to defeat this boss. However, you will also need minions and/or spells to defend yourself from Saurfang's minions and to remove taunts that prevent you from attacking his face with your weapon. Generally speaking, you will want to control the board before focusing on damaging the boss. Ignoring his face early on and focusing on the board has two benefits: your damage will not be wasted by Blood Beast heals (as Saurfang will likely play them for tempo, leaving them open to be killed), and he gets one less draw from each Battle Rage, meaning he runs out of steam faster. Board control also makes it easier to handle Acolyte of Pain, which will further starve him of card draw. Once Saurfang's hand is depleted, you can simply whittle him down at your leisure.

A good combo to use is Assassin's Blade + Deadly Poison: four charges of 5 damage each is exactly enough to kill this boss. The downside as that this requires 6 mana to cast, and you need to have both cards in hand. Cavern Shinyfinder can aid in drawing Assassin's Blade, while Counterfeit Coin and Swashburglar, which gives The Coin when used against Saurfang, can alleviate the mana cost and allow the combo to be played sooner. Removing Blood Beast is imperative for this strategy, as even one heal will allow Saurfang to outlast your Assassin's Blade.

Another alternative is to play Warrior, the class with the most weapons available, and some of the Pirate combo's that allow you to buff your weapon.

Uther of the Ebon Blade is a fairly good choice for the fight, as Grave Vengeance will remove three-fourths of Saurfang's health and allow you to easily finish him off with another weapon, like Truesilver Champion, and Paladin's control cards will let you clear out Saurfang's minions and bleed out his resources until you can start attacking him without being threatened. Additionally, The Four Horsemen can instantly kill Saurfang, freeing up your weapons for contesting the board if necessary.

Note that fatigue and mill strategies will not work on their own, as Saurfang does not receive fatigue damage.

The Lich King
Deathbringer Saurfang was my first legendary minion. I built this whole adventure around him.

Deathbringer Saurfang
Come and face the might of the Scourge!

Deathbringer Saurfang
By the might of the Lich King!

Deathbringer Saurfang
Face the might of the scourge!
Fight! Die! Your fate is sealed.
I have become death!
The Lich king claims all.

Deathbringer Saurfang
Do your worst!

Deathbringer Saurfang
Feast, my minions!
Devour them...
My power only grows.
My rage is made flesh!

Take it. You'll never get the smell out of your clothes.

Whose idea was this?

At last! A worthy opponent!

Deathbringer Saurfang
What are YOU doing here?
The Lich King
Don't worry. I can't attack you.

Deathbringer Saurfang
I am... released...
The Lich King
That was my favourite legendary! Now I have to dust him for something better.

The Lich King
You brought the wrong weapon to a knife fight.

Deathbringer Saurfang is the fourth boss in the Icecrown Citadel raid. He is described as being the Lich King's most powerful death knight.[2] It's mainly a DPS race with an interesting twist (Blood Power).

After falling to Frostmourne at the Battle of Angrathar the Wrathgate, Dranosh Saurfang was raised in undeath by the Lich King and brought to Icecrown Citadel. Imbued with the power of the Scourge, the Deathbringer bars the way of any attackers trying to enter the Upper Spire.