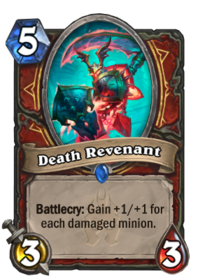 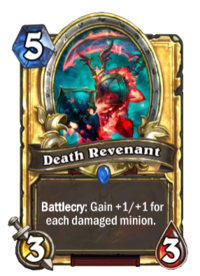 Battlecry: Gain +1/+1 for each damaged minion.

Death Revenant is a rare warrior minion card, from the Knights of the Frozen Throne set.

Death Revenant can be obtained through Knights of the Frozen Throne card packs, or through crafting.

Death Revenant is ideally played when there are 3 or more damaged minions on the battlefield to have enough stats for its cost.

To ensure this, playing AoE-damaging cards such as Blood Razor, Death's Bite, Whirlwind, or Garrosh Death Knight hero power Bladestorm and combo with Death Revenant can potentially build up a huge threat for the opponent.

This card's maximum possible stats are 29/29 if it combined with Brann Bronzebeard on a full damaged board, including Brann.

Revenants are armored elemental creatures. They look similar to floating suits of crude armor. They also wield large maces and carry giant shields. The most famous revenant was The Guardian, protector of Frostmourne. Some are soldiers of the Old Gods in the Elemental Plane.

In Warcraft III: Reign of Chaos, revenants were described as phantom undead creatures bonded to base elemental spirits, though this description has not been referenced since. Death revenants are an obscure type of revenant who mainly only appear in the form of the Deathshadow Revenant and possibly Shadow Revenant mobs, a piece of concept art, and the non-canonical Warcraft RPG. Very little is therefore known about this particular type of revenant and its connection to undead and elemental creatures alike.