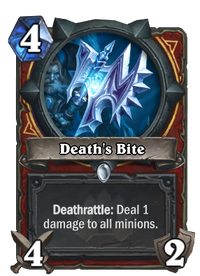 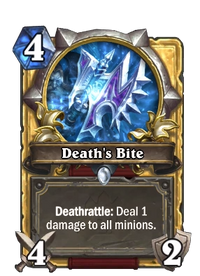 Deathrattle: Deal 1 damage to all minions.

Death's Bite is a common warrior weapon card, from the Naxxramas set.

Two copies of regular Death's Bite are obtained by completing the warrior Class Challenge in Curse of Naxxramas.

As a Wild format card, both regular and golden versions of Death's Bite can also be crafted for the following amounts:

Offering two powerful attacks and a highly versatile Deathrattle at a decent manacost, Death's Bite is a cornerstone in many Wild format Warrior decks. 4 damage is enough to destroy most early to mid-game minions outright. As a bonus the second strike is effectively 5 damage (if used to attack a minion), thanks to the Deathrattle.

Death's Bite's Deathrattle can be used in the same way as Whirlwind, triggering Enrage effects and on-damage effects such as Armorsmith and Frothing Berserker. A very powerful combo is to summon Grommash Hellscream on the same turn you use up Death's Bite, allowing it to deal massive damage without warning.

Death's Bite is a two-handed axe that drops from Kel'Thuzad in the 10-man version of Naxxramas. 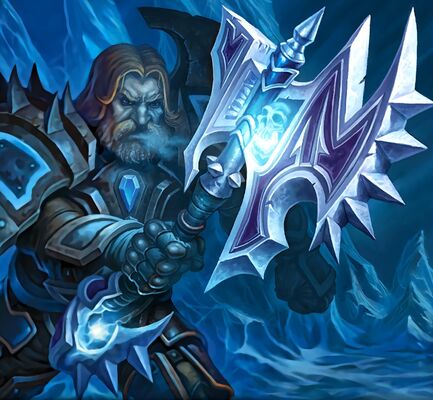