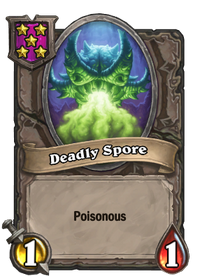 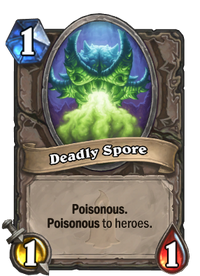 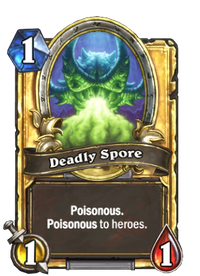 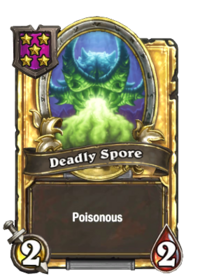 Deadly Spore is a Tier 5 minion in the Battlegrounds game mode.

Deadly Spore is one of two minions that are innately Poisonous, allowing it to kill any one minion with a single hit. This card can be extremely valuable if your upcoming opponent is known to have a powerful minion you can't easily trade against, such as an Annihilan Battlemaster. Generally, the Deadly Spore should not be placed first since any Divine Shield with Taunt will nullify the Poisonous effect. It's available earlier than Maexxna and isn't affected by tribe restrictions, but its awful stats and lack of tribe synergy means it will have a hard time being part of a team's composition. As a result, it's generally used more often as a tech card against huge Taunt minions.

You can use a Deadly Spore to counter Zapp Slywick, especially for protecting Baron Rivendare. Both have the same amount of Attack unbuffed, so even under the least optimal conditions, there's a 50% chance Zapp will hit the Deadly Spore and die on the spot, keeping your Baron safe.