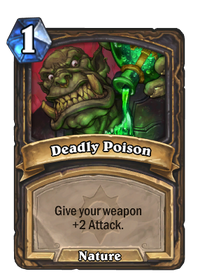 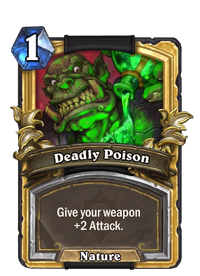 Give your weapon +2 Attack.

Rogues guard the secrets to poison-making carefully, lest magi start incorporating poison into their spells. Poisonbolt? Rain of Poison? Poison Elemental? Nobody wants that.

Deadly Poison is a rogue spell card, from the Basic set.

Two copies of Deadly Poison are automatically included in all players' collections upon unlocking the rogue class.

Two Golden copies of Deadly Poison are a reward for raising a rogue to levels 43 and 44.

Deadly Poison is uncraftable and cannot be crafted or disenchanted.

Deadly Poison (Core) is uncraftable and cannot be crafted or disenchanted.

Deadly Poison has synergy with Bloodsail Raider, Dread Corsair, and the rogue Blade Flurry spell, all three of which benefit from greater weapon attack. It is most efficiently used to improve a weapon with sizeable durability, such as Assassin's Blade.

Deadly Poison is a rogue ability in World of Warcraft that provides a temporary enchantment on a weapon. This enchantment has a chance of adding a damage over time debuff to an enemy on each attack.