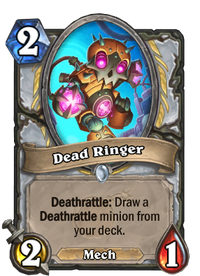 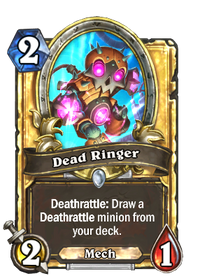 Deathrattle: Draw a Deathrattle minion from your deck.

Dead Ringer is a common priest minion card, from The Boomsday Project set.

Dead Ringer can be obtained through The Boomsday Project card packs, or through crafting.

A decent card for cycling through your deck. It is identical to Loot Hoarder, but tutors for other Deathrattle cards. This is also a potential benefit if Dead Ringer is drawn late, since it may not draw you into fatigue. You may want to include a few extra Deathrattles in your deck, such as Bloodmage Thalnos, to ensure the effect will trigger.

Summon
Destroy all the humans.
Attack
Destroy.
Death
I am dead...