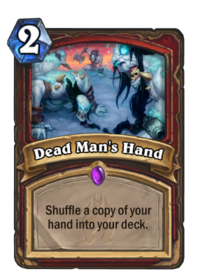 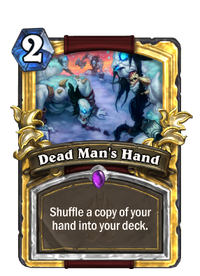 Shuffle a copy of your hand into your deck.

I got two pair, Rags and Armorsmiths. What you got?

Dead Man's Hand is an epic warrior spell card, from the Knights of the Frozen Throne set.

Dead Man's Hand can be obtained through Knights of the Frozen Throne card packs, or through crafting.

Dead Man's Hand is a strong card if you're capable of maintaining a good amount of strong cards in hand. Shuffling a hand full of powerful cards into your deck can be excellent for generating extra copies of Removal spells as well as powerful late-game minions. Similiar to Jade Idol, this card can be used to indefinitely prevent Fatigue damage, as long as you ensure you are always shuffling a second copy of Dead Man's Hand back into your deck. This card can be very strong in Fatigue-focused Control Warrior, allowing them to generate insane value far longer than almost any other deck.

In Arena, Dead Man's Hand likely won't make an impact on the game, as it has no immediate effect and the shuffle effect is largely irrelevant due to the short length of the average Arena game.