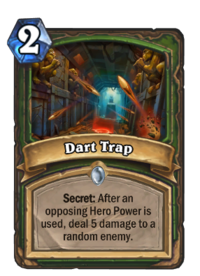 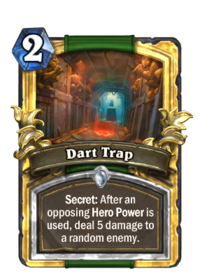 Secret: After an opposing Hero Power is used, deal 5 damage to a random enemy.

Five years of tap-dancing lessons are FINALLY going to pay off!

Dart Trap is a hunter spell card, from the League of Explorers set.

Two copies of regular Dart Trap are obtained by completing the hunter Class Challenge in The League of Explorers, unlocked upon completing the adventure's third wing, The Ruined City.

As a Wild format card, both regular and golden versions of Dart Trap can also be crafted for the following amounts:

Example: If the opponent uses Reinforce, the Dart Trap will have a chance to target the summoned Silver Hand Recruit.
Example: A minion mortally wounded by Dart Trap can still trigger its Inspire effect.[2]

Dart Trap is original to Hearthstone.

The dart trap appears to be guarding the way to the Golden Monkey. 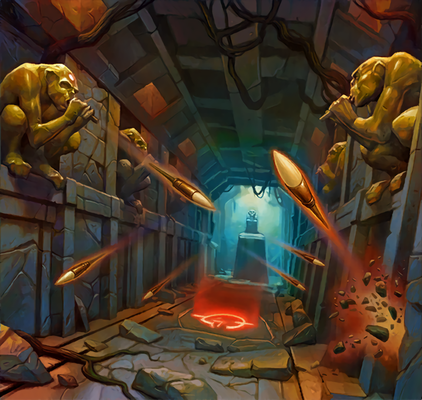