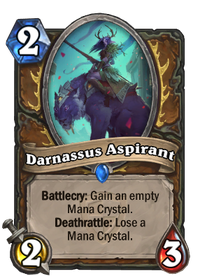 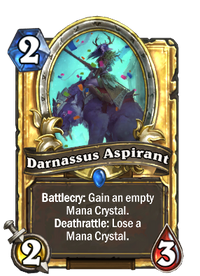 Darnassus Aspirant is a rare druid minion card, from the Grand Tournament set.

Darnassus Aspirant can be obtained through The Grand Tournament card packs, or through crafting.

Silencing this minion will cause the Deathrattle to be removed, allowing the Mana Crystal gain to be permanent. You could also use a Return to hand effect such as the Youthful Brewmaster to allow you to avoid the Deathrattle, keep the crystal and play it again for a second crystal. Conversely, try to avoid using Return effects like Sap to remove hostile Darnassus Aspirants. Darnassus Aspirant played on turn 2 will ramp you to 4 mana next turn, making Keeper of the Grove, Wailing Soul or Ancient Brewmaster available to play if you so choose.

This minion can be used to counter stealing or copying effects, such as Mirror Entity or Sylvanas Windrunner. You will gain the positive effects from the Battlecry, while your opponent will only have the downside of the Deathrattle.

Piloted Shredder's Deathrattle can summon this minion and in this situation you only suffer its Deathrattle, as the Battlecry is not activated.

This card is similar to Wild Growth, except potentially stronger as it provides early game board control. The drawback being that the mana may later be removed due to the Deathrattle.

Since if the Deathrattle triggers while you only have filled Mana Crystals you lose a full one instead of an empty one, it is usually better to spend at least one mana before trading your Darnassus Aspirant.[5]

This minion is an Aspirant representing Darnassus, the capital of the night elves.

Darnassus (aka Darnassus City) is the capital city of the night elves of the Alliance. The high priestess, Tyrande Whisperwind, resides in the Temple of the Moon, surrounded by other sisters of Elune and her mate, the Arch-Druid Malfurion Stormrage.

Darnassus is the greatest city of the night elves, housing the leaders of both the druids and the faithful of Elune. It is carefully guarded by Sentinels, ancient protectors, and ancients of war.

From the official site:

Atop the massive boughs of the second World Tree, Teldrassil, lies the wondrous city of Darnassus. The elegant bridges, beautiful groves, and leaf-covered pathways that dot the city’s landscape are testaments to the night elves’ reverence for nature. One of Darnassus’s most notable structures is the stunning Temple of the Moon, the center of worship for High Priestess Tyrande Whisperwind and her Sisters of Elune.

Darnassus is home to night elves of all vocations, and the city has recently opened its doors to human refugees from Gilneas as well. Many of these embattled humans have contracted a strange curse that transforms them into feral wolf-beasts known as worgen. Although they’re usually reclusive, the night elves have allowed these outsiders into Darnassus because they know the perils of the Gilneans’ cursed state all too well: it was, in fact, a group of night elf druids that created Azeroth’s first worgen millennia ago. Despite the arrival of these new residents, Darnassus remains a symbol of the night elves’ rich culture and glorious history.

Darnassus Aspirant is voiced by .